Fabio Quartararo admits he “needs to be clever” in battling with Yamaha MotoGP team-mate Maverick Vinales in the Dutch Grand Prix.

Vinales will start from pole for the first time in 2021 after denying Quartararo by 0.071 seconds in a tight fight between the pair in qualifying at Assen on Saturday.

Quartararo appears to have the strongest race pace of the grid and comes into Sunday’s race 22 points clear in the championship standings, while his nearest rivals in Ducati trio Francesco Bagnaia, Johann Zarco and Jack Miller start behind him in third, fifth and sixth.

Vinales’ FP4 long runs are comparable to Quartararo’s, setting up the prospect of the first duel between the pair as factory Yamaha riders on Sunday.

“I think with Maverick we need to be clever, because it’s true that on the paper we have really good pace,” Quartararo said.

“So, I think if we need to play something in my opinion it’s great to be clever on the first lap and see at the end.

“But it will depend. I feel great to fight for the victory.

“It’s not that because my main contenders are behind me that I need to be careful.

“For me, it’s the beginning of the championship, we are not even in the middle.

“So, if I have one chance to fight for the victory I will go for it.

“So, it will depend on the situation, but right now I feel I can fight for it.” 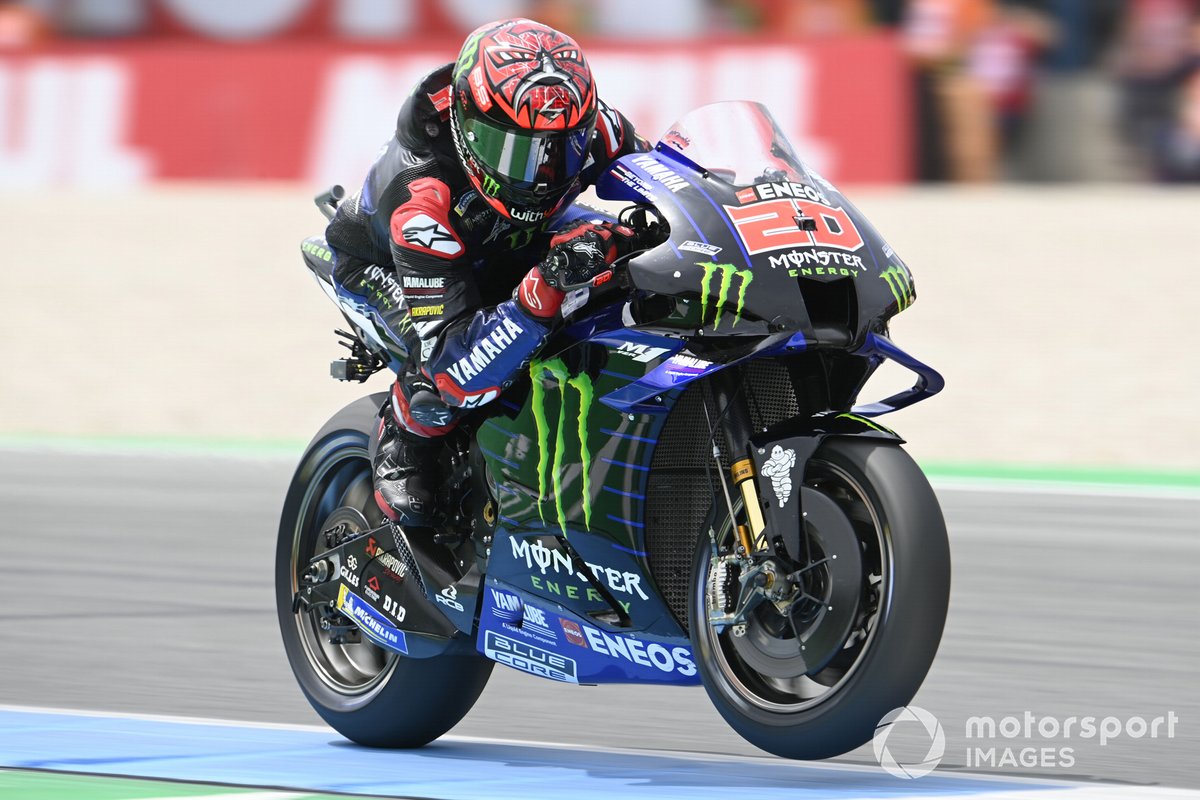 Following the five-week summer break after the Dutch TT, MotoGP will hold a double-header in Austria – one of Yamaha’s weakest tracks on paper owing to its top speed deficit.

When asked by Autosport if winning at Assen held a greater significance given the problems Austria could pose, Quartararo believes approaching Sunday’s race like this wouldn’t be correct at this stage of the championship.

“To be honest, Austria is a track that last year was a disaster for us but I think more because we knew all the problems that we had last year,” he explained.

“But for me the bike has improved a lot in the braking area and our holeshot device is working better.

“Electronics we still have no problem, so I think Austria is not a bad track for us.

“If you consider we stay the same, I think it’s going to be ok.

“Of course, we miss the top speed, but in 2019 I was able to fight for the podium and if I’m not wrong Maverick and Valentino [Rossi] finished fourth and fifth.

“It’s not a bad track for us, just it’s difficult, not the best one.

“Here, I will do my best. Even if I make a mistake or something, the championship is still really open.

“So, I just want to enjoy tomorrow, it’s a fantastic track and enjoy the 26 laps.”

Bagnaia "lucky" to drop into Q1 in Assen MotoGP qualifying