The Red Bull Ring is arguably Yamaha’s weakest circuit on the entire calendar, with its long straights and hard acceleration zones at odds with the M1’s lack of power.

Suffering a disastrous Austria double-header in 2020, Quartararo was strong throughout last weekend’s Styrian GP, qualifying third (having had a record pole lap cancelled for exceeding track limits) and going on to finish third in the race.

Battling with Ducati’s Jack Miller in the first half of the race, Quartararo came under pressure in the latter stages, but a crash for the Australian gave the Yamaha rider a comfortable run to the podium to extend his championship lead to 40 points.

“Yeah, was tough because when I was behind Jack he made a small mistake in Turn 1 and it was the only way for me to stay behind him in the straight,” Quartararo said.

“And I knew in Turn 3 I was struggling a lot all weekend, but today and yesterday I was pretty strong and in the first race [before the red flag] I could overtake Marc [Marquez].

“Then I overtook Jack, we had a little bit of a nice fight.

“We lose a little bit compared to the two front guys, but I couldn’t do better.

“So, really pleased for this podium and we know in which area we need to work on. So, pretty happy and I think we have made a great job.” 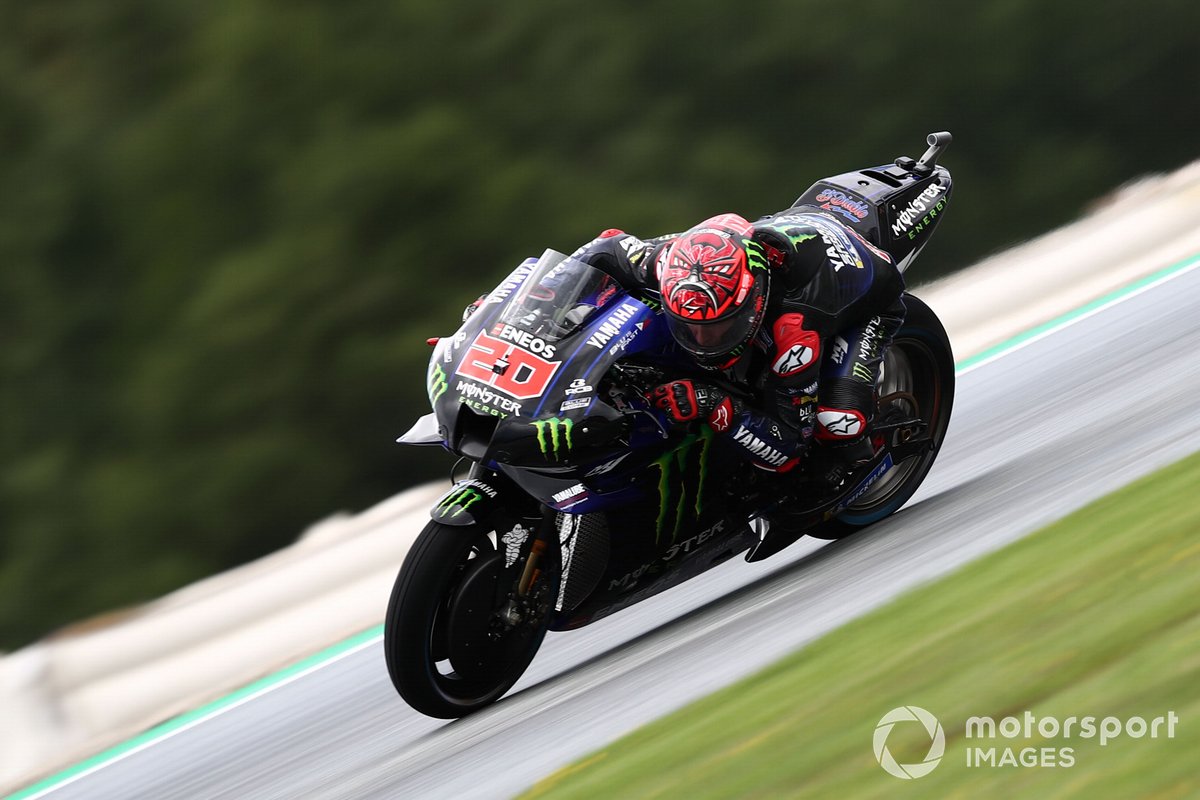 Looking ahead to this weekend’s Austrian GP at the same venue, Quartararo says Yamaha has to improve its rear tyre performance having struggled last Sunday.

“In the first race behind Jorge [Martin] I was there behind and in the last corner I was carrying so much speed.

“I was looking at him and I was like ‘ah, he’s saving a lot the tyre’, and as soon as he picked up the bike he was pulling a lot.

“So, we will try to manage the best way as possible. We know we don’t have the same potential as Ducati’s on acceleration, but I mean for us a podium here was perfect.

“So, I think our pace in the practice is always very good but when the race arrives we don’t feel the same with the rear tyre.

“I think knowing that for next week is going to be important.”

Yamaha team-mate Maverick Vinales finished the race in pitlane after electronics problems meant he was being shown ‘pitlane’ messages on his dashboard.

Having made a strong start to the race before it was red-flagged for the fiery incident between Dani Pedrosa and Lorenzo Savadori, Vinales stalled on the grid for the second start and had to launch from pitlane.

“Well, honestly I’m quite happy in one way because the first race, the first five laps has been fantastic honestly, I was quite happy,” he said.

“I think it’s the first time I jumped two rows. So, it was good.

“For that I’m happy. But then we go to the box, they change the tyres, changed the clutch and everything was different.