Dani Pedrosa has announced he has reached a decision regarding his MotoGP future, and will reveal his choice in a press conference at the Sachsenring a week on Thursday

Although Pedrosa has been strongly linked to the new Petronas-backed satellite Yamaha team that is set to join MotoGP in 2019, it is now thought he is considering retirement as a serious option.

The 32-year-old has made his worst start to a world championship campaign since his 125cc debut in 2001, as he has scored just 41 points in eight races - 99 fewer than his Honda team-mate Marc Marquez.

Pedrosa's best finishes this year have been a pair of fifth places at Le Mans and Barcelona, while he finished 15th in last weekend's Dutch TT at Assen.

It was confirmed last month that Pedrosa will leave the works Honda team at the end of 2018 and he will be replaced by Jorge Lorenzo.

"I have finally made a decision regarding my future," wrote Pedrosa in a statement. "I want to be able to communicate it personally and to everyone at the same time.

"Therefore, at the Sachsenring I will hold a press conference to announce it. I hope that my decision to wait until then to make it public will be respected." 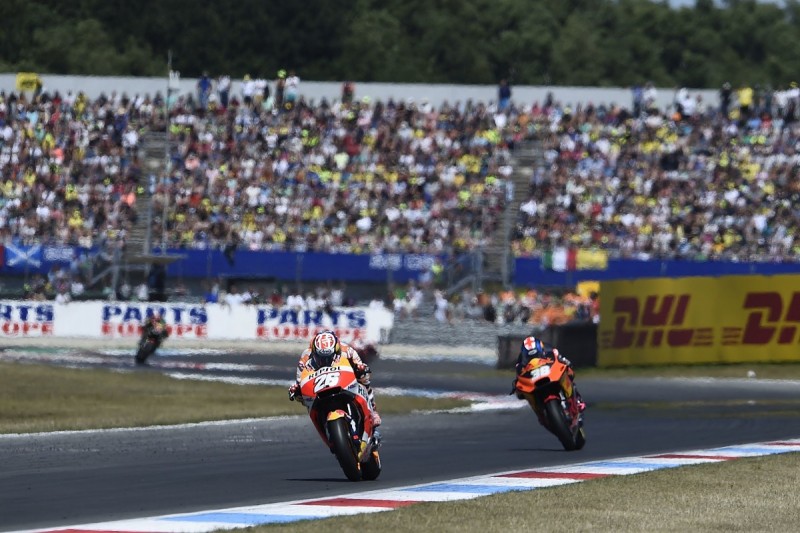 Pedrosa has previously admitted that a lack of uncertainty about his future was impacting his on-track performances in 2018, while Marquez has suggested his team-mate's woes stem from a lack of motivation.

Should Pedrosa decide to hang up his leathers, it would open an unexpected chance for another rider to line up alongside Franco Morbidelli on a satellite Yamaha next season.

Nieto Ducati rider Alvaro Bautista has said his chances of staying in MotoGP likely hinge on Pedrosa's decision, while KTM's Bradley Smith has also said he is targeting the ride after losing his seat at the Austrian manufacturer to Johann Zarco for 2019.

But it's possible that another Valentino Rossi protege, Moto2 race winner Lorenzo Baldassarri, could end up joining Morbidelli on the second Sepang-owned M1.