MotoGP championship leader Maverick Vinales beat Yamaha team-mate Valentino Rossi to pole position for the Italian Grand Prix at Mugello, topping qualifying for the second round in a row

After progressing from the first phase of qualifying, Pramac Ducati's Danilo Petrucci threatened to spring a surprise on home soil at Mugello, leading the way into the closing stages with a lap of 1m47.266s.

Vinales, though, was only 0.005 seconds behind Petrucci and after Dani Pedrosa grabbed top spot briefly, the Yamaha rider vaulted to the top inside the final two minutes.

However Petrucci's time was scrapped for exceeding track limits at Borgo San Lorenzo and he fell from second to ninth.

Rossi was the main beneficiary, having been 11th of the 12 riders entering the final 60 seconds of Q2 before turning the 1m46.814s that put him into third place and then second.

The Italian is riding nine days after sustaining chest injuries in a motocross training accident and spending a night in hospital, and also fell in the fourth practice session that preceded qualifying.

Ducati's Andrea Dovizioso will start from the front row of the grid for the first time in 2017 in third place alongside the Yamahas.

Honda pair Pedrosa and Marc Marquez will start fifth and sixth, Marquez after improving on his final lap. 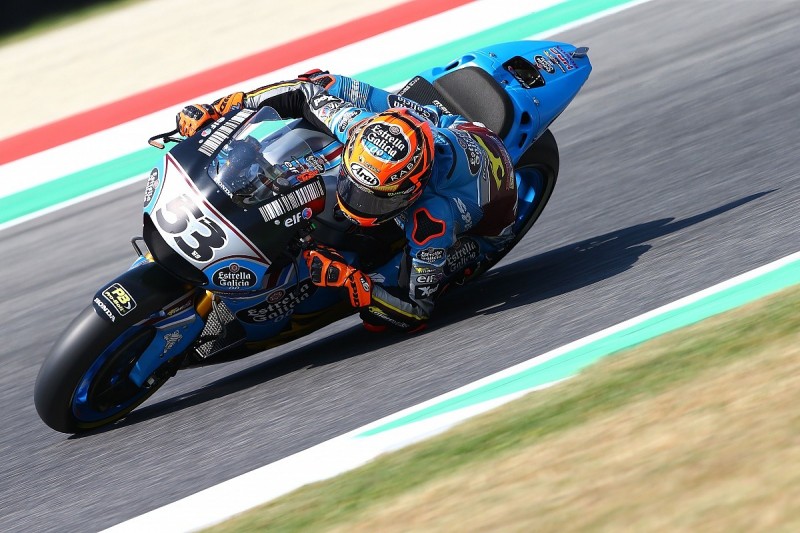 Tito Rabat qualified a career-best 10th for Marc VDS Honda, one spot ahead of Tech3 Yamaha's Johann Zarco - who joined Petrucci in progressing from Q1.

Aprilia's Aleix Espargaro crashed at Arrabbiata 2 on his first flying lap, but got back out his second RS-GP for the second half of the session and will start 12th.

Friday pacesetter Cal Crutchlow was the biggest casualty of Q1, contesting the session after falling out of the combined practice top 10 in Saturday morning's third practice.

Crutchlow moved to the top of the times briefly with two minutes remaining, but was then pipped by Zarco and Petrucci, missed out on a Q2 spot by 0.079s and will start 13th.

Zarco's Tech3 team-mate Jonas Folger also spent time in the top two, only to crash at Palagio on his final run.

Folger will line up 15th, one spot ahead of Suzuki's Andrea Iannone, while Pol Espargaro was the best of the KTMs in 18th.