While the morning's first session at Mugello was incident free, Vinales was one of three riders to come unstuck inside the opening 15 minutes in the afternoon.

Aprilia had the first two, with Aleix Espargaro and Sam Lowes both crashing in the space of two torrid minutes, a little over 10 minutes into the session.

Vinales went down at Arrabbiata 2 shortly afterwards while second in the order, losing the front end on the kerb turning in.

The Spaniard retreated to his enclave within the Yamaha truck when he returned to the paddock, and finally rejoined the session with 10 minutes remaining.

Focusing on the harder tyres, Vinales fell down the order from fifth and did not improve until his final lap and even then only fractionally.

He finished in 13th place, between team-mate Valentino Rossi - nursing chest injuries from his motocross accident eight days ago - and Marc Marquez. 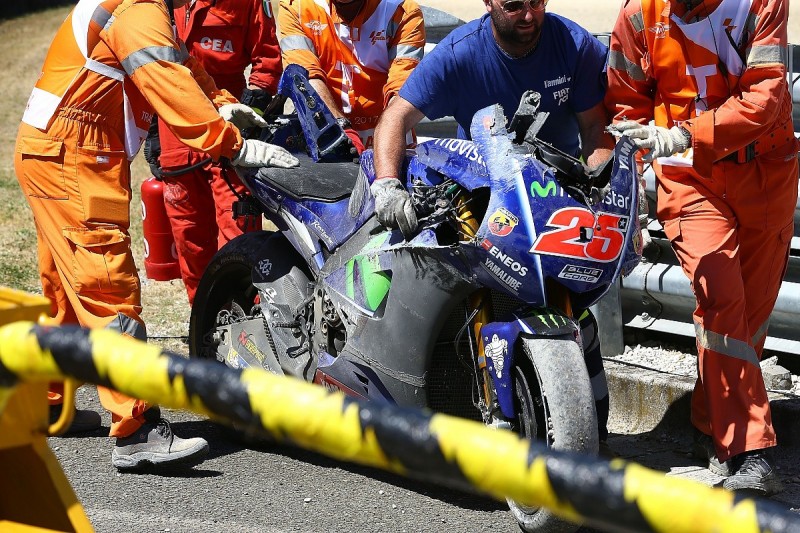 Like Vinales, reigning world champion Marquez opted not to use the soft rear tyre at all during the 45 minutes.

Vinales and then Alvaro Bautista led the way during the early stages, the Aspar Ducati rider then displaced by Dovizioso at the top with just over 20 minutes remaining.

First-practice pacesetter Dovizioso turned a 1m47.864s and then a 1m47.526s to sit 0.173 seconds clear of Honda's Dani Pedrosa when riders started their new-tyre runs.

The first and ultimately only rider to lap faster than Dovizioso was Crutchlow with a 1m47.365s set with three minutes remaining.

Crutchlow finished 0.161s ahead of Dovizioso, while Tech3 Yamaha rookies Jonas Folger and Johann Zarco improved late to finish third and fourth, ahead of Pedrosa.

Jorge Lorenzo wound up 11th, 0.589s off top spot, having improved on new tyres in his final run.

Of the Aprilia riders, Espargaro got back out inside the final 10 minutes and finished 16th - the last of the riders within one second of Crutchlow - four spots ahead of Lowes.

With his second bike sidelined by a fuel-pump problem, Lowes was not able to rejoin the session and finished with just five laps on the board.