Petrucci was first of the two to head out on track in the Q2 session but had a slow out-lap and was looking over his shoulder several times, allowing the Suzuki of Mir through right before the start of the flying lap.

He followed Mir on what would end up being his fastest lap and was still in Mir's wake when the Suzuki rider slowed at Turn 9 next time around.

The move left Petrucci incensed as he was forced to release the throttle and the situation was repeated on the next lap, leading Petrucci to shake his fist towards Mir before both riders went into the pitlane.

"I was just far [behind him], one second and a half on the first attempt, but then he slowed down," said Petrucci.

"He turned his head and he saw me but he remained in the middle of the track at Turn 11 - so I gave him space again and I pushed for the second attempt on the new rear tyre.

"I was again at one second and a half distance [behind Mir], I didn't want to lose a lot of time and cool down the tyre.

"But then he slowed down again and he turned his head, saw me and remained in the middle of the track.

"I don't know why. I haven't had a chance to do a good lap. Maybe I have to leave him more space, but I thought one second and a half was enough.

"But the strange thing is that two times he turned his head and saw me, and he braked.

"For this reason, I was quite angry. And from the [TV] images you can see that he turned his head and saw me, and stopped in the middle of the track."

Mir described the situation as "something strange" and said Petrucci would not have had his laps ruined if he had not waited to follow the Suzuki on his outlap. 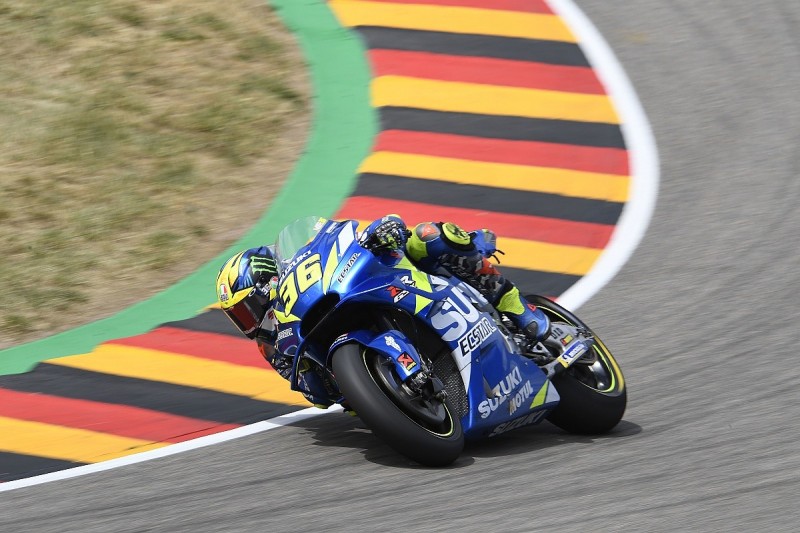 It is unclear if Mir and Petrucci's incident will be investigated by the stewards.

"I was waiting in the pitlane, as not to disturb everyone and be completely alone during my two laps, and Petrucci started in front - probably seven-eight seconds in front of me - then he waited for all the track to take my [rear] wheel," said Mir.

"I made my two laps, I helped him probably, and then when I finished the two laps I went into the pitlane and I was completely into the kerb, looking behind to not disturb anybody going into the pits.

"The thing is, if Petrucci was pushing from the beginning and not waiting for my wheel, for sure I wouldn't disturb him in this case.

"I think it's unfair if I'm penalised for this action because I didn't do anything wrong."