Honda rider Dani Pedrosa topped first practice ahead of the second race of the 2018 MotoGP season, which is taking place at Argentina's Termas de Rio Hondo circuit this weekend

Pedrosa shot up to the top of the timing screens in the final seconds of the 45-minute session to lead a Honda 1-2 with LCR rider Cal Crutchlow in second by just 0.042s.

Pedrosa's team-mate Marc Marquez, who has been on pole for every MotoGP race held at the Argentine venue so far, initially led the way in FP1.

But the reigning champion was shuffled down to fourth at the conclusion of the opening runs, trailing Pramac Ducati's Jack Miller, Crutchlow and Tech3 Yamaha rookie Hafizh Syahrin.

Marquez restored himself to the top spot at the halfway point, first logging a 1m41.331s before posing gradual improvements of 1m41.081s and then a 1m40.951s.

As the session approached the final 10 minutes, Crutchlow overhauled Marquez by a tenth, but was immediately surpassed by Suzuki's Andrea Iannone, who had followed the Briton on his flying lap and helped himself to a 1m40.422s.

But a late improvement by Iannone was not enough to prevent him from being passed by Pedrosa and Crutchlow - and while he was up on their laptimes for most of his final effort at the chequered flag, he had to settle for third. 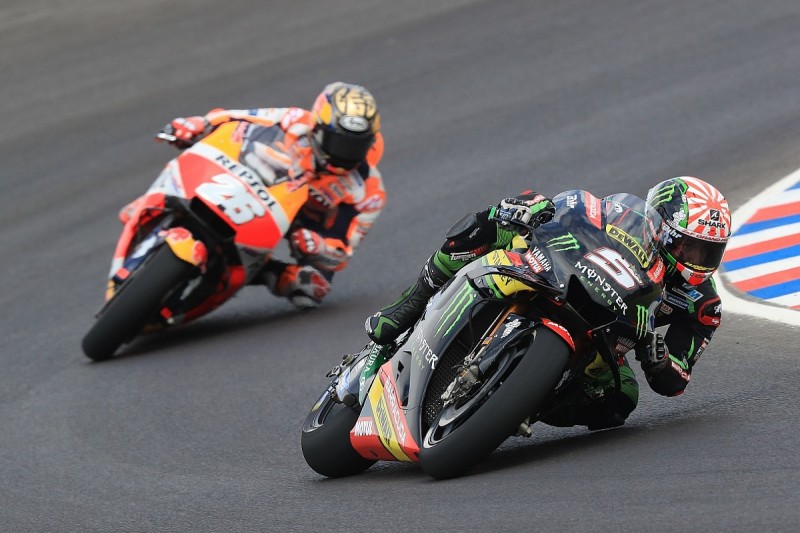 Tech3's Johann Zarco led the Yamaha contingent in fourth, ahead of Miller - the highest-placed Ducati rider, and Marquez. Yamaha's Valentino Rossi was seventh, ahead of Ducati's championship leader Andrea Dovizioso and his works team-mate Jorge Lorenzo.

Pramac's Danilo Petrucci completed the top 10 despite being the only rider to crash in the first session at the newly-surfaced track.

Petrucci took a tumble at the hairpin-like Turn 13 that had nearly caught out Marquez earlier on.

Ducati 'pretty confident' over Dovizioso deal, no Lorenzo talks yet