Marquez started the day 52 points clear of Rossi and 66 ahead of Lorenzo, and with 75 still on offer in the three grands prix after the Motegi race had downplayed his prospects of sealing the title.

However, with his fifth victory of the season, and with the Yamaha pair both falling out of contention, the 23-year-old has a third premier class title to go with his 2013 and '14 triumphs.

Marquez took the lead off the line, but exited the first corner in second place, behind Lorenzo, who muscled his way past both polesitter Rossi and Marquez on the inside line.

Lorenzo led the way until the fourth lap, when Marquez moved past down the inside at Turn 9.

Rossi had to wait another two laps to do the same, and by that time Marquez was 0.866 seconds clear and setting a string of fastest laps.

Any hopes Rossi had of chasing Marquez down came to an end on lap seven, when the Italian crashed at Turn 10.

He remounted but headed straight back to the Yamaha garage, retiring from the race and bringing his title challenge to an end.

In order to keep his own hopes alive, Lorenzo had to finish on the podium.

Battered after his Saturday practice accident, Lorenzo stayed in second place, but his advantage over Andrea Dovizioso was gradually cut.

With seven laps to go the Ducati rider was just four tenths behind, while having lapped relentlessly in the 1m45s barrier for the first 14 laps, Marquez led by nearly four seconds. 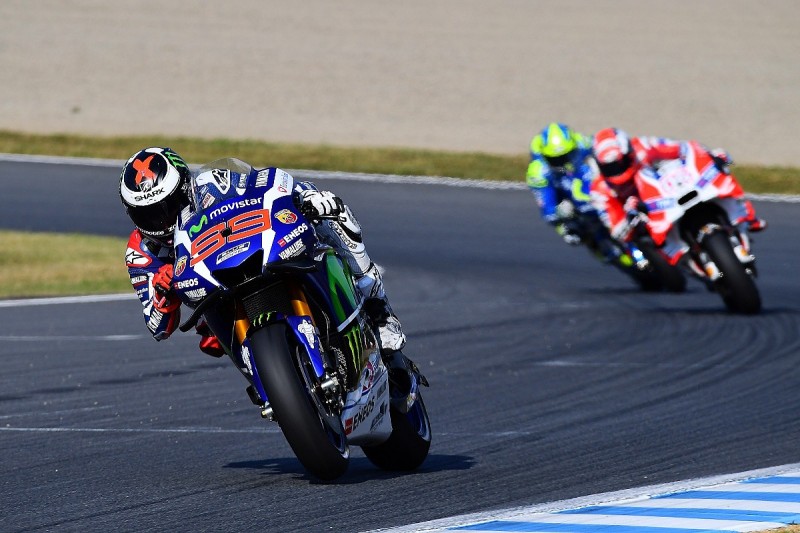 Marquez's day then got better when Lorenzo lost the front end of his Yamaha at Turn 9 with five laps remaining.

He got the message on his pitboard that Lorenzo was down, and made no mistake from there, taking victory to seal the title with three races to go, at Honda's home circuit.

Along with 125cc and Moto2 titles in 2010 and '12, Marquez is the youngest rider to reach five world championships across the three classes.

Dovizioso picked up second place, while Maverick Vinales caught and passed Suzuki team-mate Aleix Espargaro in the final third of the race to complete the podium.

LCR Honda's Cal Crutchlow was the only frontrunner to opt for the hardest of the three front tyres, and his switch on the grid did not pay off as he finished a distant fifth, delayed by a mid-race off.

Pol Espargaro was sixth for Tech3 Yamaha, while Aprilia and Pramac Ducati riders completed the top 10, with Alvaro Bautista seventh and 10th, and Danilo Petrucci and Scott Redding eighth and ninth.

On his return from injury after missing the last three grands prix, Bradley Smith battled his way to 13th place.