Marquez was well ahead for much of the session, but dropped his Honda at the sharp final corner in the closing stages.

He rejoined on his second bike for a final run, but couldn't improve and was shuffled down the order.

Marquez, who had topped the first free practice session, initially carried his imperious form into the afternoon, gradually improving his pace to end up with the weekend's new fastest lap - 1m33.475s - at the 10-minute mark.

That lap time was untroubled for most of the 45-minute practice, as Petrucci, fellow Ducati riders Jorge Lorenzo and Michele Pirro, and Marquez's team-mate Dani Pedrosa took turns as best of the rest.

Pedrosa finally surpassed Marquez with a 1m33.420s lap in the dying minutes, only for Petrucci to secure first place with a 1m33.231s effort. 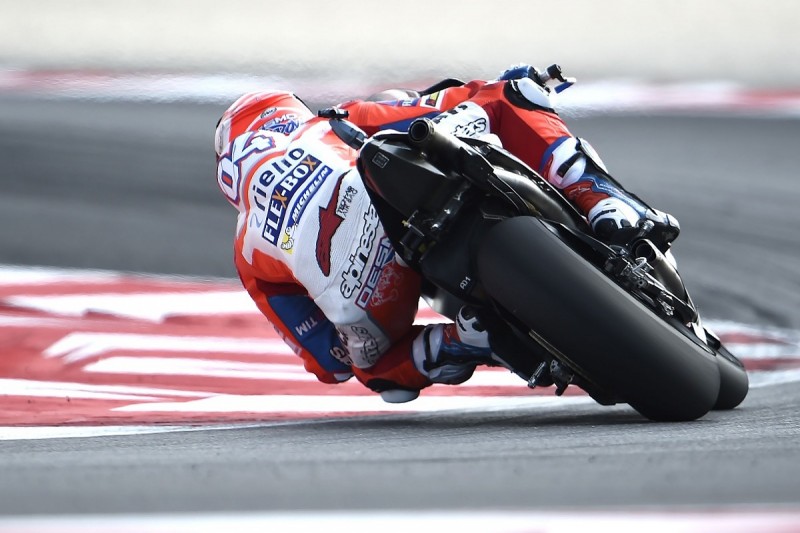 Dovizioso was then also beaten by the Yamaha of Maverick Vinales, who struggled with corner-entry grip in first practice but managed a late surge in the afternoon session, finishing just 0.005s off the pace.

Behind Petrucci, Vinales and Dovizioso, the Hondas of Pedrosa and Marquez made up the top five.

LCR Honda rider Cal Crutchlow was sixth and emerged unscathed from a crash at the Turn 15 left-hander near the end of the lap.

Making up the top 10 were Andrea Iannone and Tito Rabat, with Aleix Espargaro, trialling a new fairing on his Aprilia, next up.