Suzuki rider Mir leads the standings by 14 points from Petronas SRT's Fabio Quartararo after securing his sixth podium of the 2020 campaign with third place last weekend at Aragon, with the spread across the top six from Mir down to team-mate Alex Rins just 32 points.

With three rounds to go, Mir is the only one of the top six title contenders yet to win a grand prix in 2020.

PLUS: Why Mir shouldn't obsess over winning in his hunt for the MotoGP title

But Dovizioso - who is 28 points behind Mir - doesn't believe the Suzuki rider needs to win a race to legitimise the title should he go on to secure it.

"No, I don't think so, not at all," Dovizioso replied when asked if Mir needed to win a race in his quest for the title.

"That's it. Everybody wants to win, everybody would like to win, but that is not the point. So, I don't think he has to."

No rider has ever won the MotoGP title without a grand prix victory in that season, though Emilio Alzamora claimed the 1999 125cc crown without a race win - only the second rider to have done so in any class.

Pramac's Jack Miller says a repeat of this for Mir is looking more likely now as he "can't see him needing to risk" winning a race in his current position. 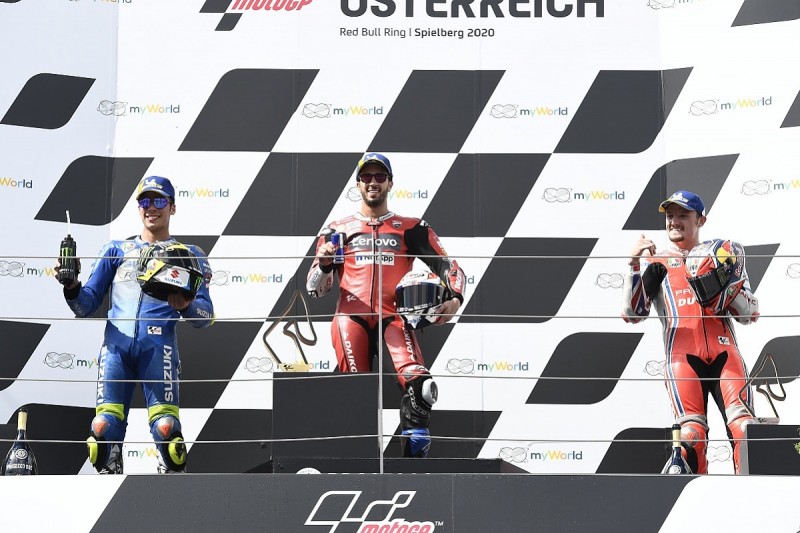 "We might have another Emilio Alzamora situation on our hands if it continues like this because I can't see him needing to risk winning a race at this point," Miller said.

"Yeah, he's had bad luck. I watched him first-hand get cleaned out by [Iker] Lecuona in Brno in the second-last corner, and if you can do it without winning a race... and he should've won that race in Austria had it not been red-flagged.

Mir was comfortably leading the Styrian GP in August when it was red-flagged for Maverick Vinales' brake failure-induced crash.

For the Suzuki rider, he insists he'd "sign" on to win the title without winning a race if the chance was offered to him.

"It doesn't matter. The important thing is to get the championship, I don't care about the win," Mir said.

"Anyway, if you get the title you show your are the fastest in MotoGP - it doesn't matter if you win a race or not.

"Of course, I want to win, every weekend I want to win a race but I don't care at all if [you're saying] 'Mir is winning the title without a victory'. OK, where do I sign [for that?], I'll sign."

Why America's latest MotoGP export could be a game changer

The other MotoGP championship battle to get excited about