Championship leader Joan Mir admits he doesn't know why he struggled so much in qualifying for the MotoGP Valencia Grand Prix, after managing just the 12th-fastest time

The Suzuki rider was fifth fastest in FP3 and secured direct passage into Q2, while his nearest title rivals Fabio Quartararo and Alex Rins - both of whom trailing Mir by 37 points - had to go into Q1.

Quartararo would only qualify 11th, while Rins languished in 14th, but Mir failed to capitalise on his rivals' struggles with a lacklustre 12th position.

"I don't know, it's strange," Mir said when asked why he struggled in qualifying.

"My feelings with the bike were super good, but then in qualifying something changed.

"I didn't have the same grip and we can see that the bike was spinning a lot more. We know the conditions were different, but the people were able to make good lap times.

"It means the track was in good condition, but not for us. It's strange, I don't know."

Mir came through from 12th on the grid at the Teruel GP to finish third, and would only need a top 10 result on Sunday to be crowned champion even if poleman Franco Morbidelli - who is 45 points adrift in the standings - wins the race.

But the Spaniard admits he won't think about his title hopes until he knows what his feeling on the bike will be in the early part of the race.

"From that point of view, yes," he replied when asked by Autosport if he could be relaxed over his qualifying given his nearest title rivals are close by.

"But I don't think so much about that. I think Franco is really strong, also about the race pace. He already showed a super good potential in FP3 and FP4. 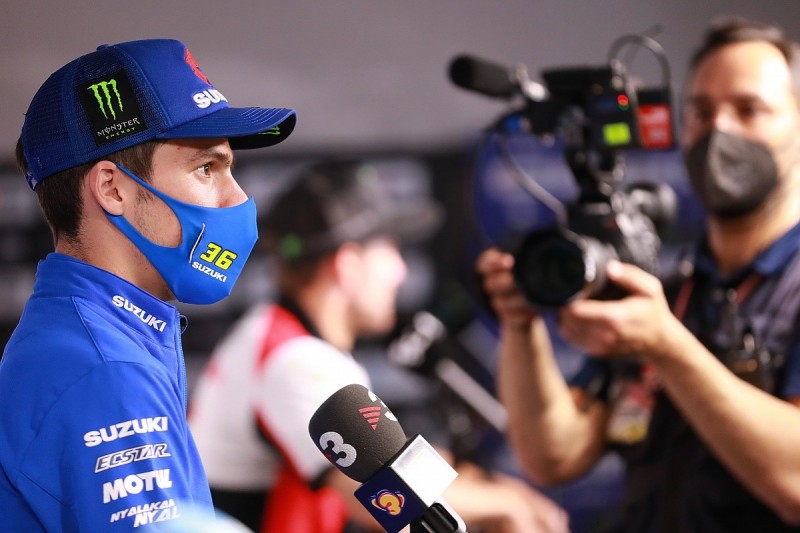 "And in qualifying he was ready to make a good lap so probably I'm one of the few riders that can be with Franco, can fight with Franco if nothing happens.

"But I start really far back, so this for sure is a problem for me to fight for the win. But I will try to give my 100%, and then on the race I will see where we are and in that moment I will start to think about the championship.

"My feelings will decide if I prefer to stay inside the top 10 but not better, or I want to go for a podium, which at the moment is what I want."

Mir admits he is feeling added pressure this weekend with the championship nearing, but this is "not a bad thing".

"Of course it's difficult, because it's a different weekend and you can feel it," he said.

"There is a lot of media pressure, it's a different weekend. I try to stay calm, but it's true all of us fighting for the championship feel the pressure more because this is going to end quickly."

Quartararo: Morbidelli's Valencia MotoGP pole advantage too much to close down