The Austrian manufacturer is making an early start to its new programme in the 2016 season finale, racing as a wildcard with Kallio, before Bradley Smith and Pol Espargaro take over full-time in 2017.

KTM has completed 35 days of testing at a host of circuits in the last 12 months - most-recently at Valencia in October - with riders led by Kallio developing its RC16.

While it insists Valencia is 'race zero' and more about procedures, Kallio says he is not thinking about circulating at the back of the 22-rider field.

"The start in Valencia will be a remarkable moment," Kallio said.

"This whole year has been great, and I couldn't imagine a better way to end the season.

"The team will have valuable experience working under pressure, and I can finally enjoy riding MotoGP again.

"I'm not going to be at the back of the pack in this race.

"I'll be focusing on some of my personal goals after the timed free practices.

"I can race without pressure, and I believe I'll be on fire when the lights go out."

After their last grand prix weekend with Tech3 Yamaha, Smith and Espargaro will test the KTM for the first time next Tuesday and Wednesday at Valencia. 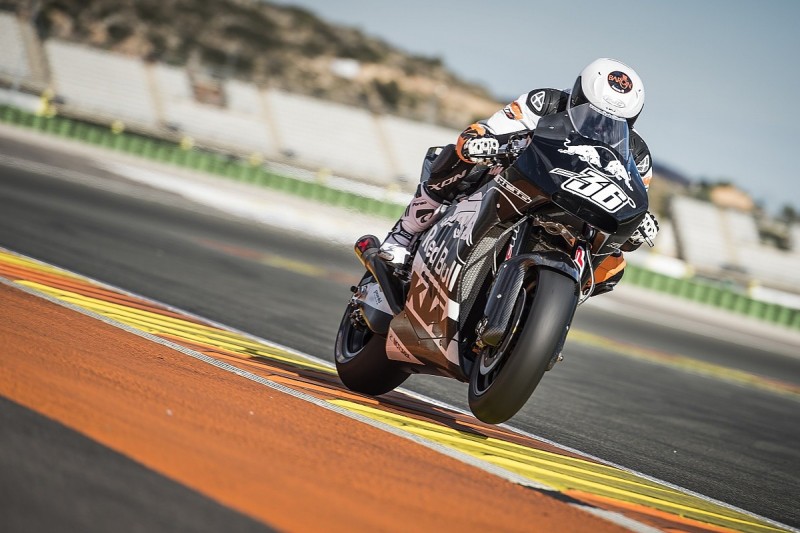 With the championship long-sealed, KTM's MotoGP debut - if you exclude its short-lived engine partnership with Kenny Roberts' team in 2005 - will be the big talking point this weekend.

The Austrians look to have done things well, even down to the detail of using a range of test riders to gain data and experience with different-sized bodies on the bike.

Its engine is regarded as a strong point, and the RC16 was firmly in the pack during the in-season test at the Red Bull Ring in July, attended by most MotoGP teams.

So you would have to back Kallio's assessment that he won't be waddling around at the back on his own.

The question is more who he will be keeping company, especially as Aprilia has made good progress in the second half of the season.

Suzuki had a baptism of fire when it made its wildcard return at Valencia two years ago, Randy de Puniet qualifying 20th and then retiring from the race while running 19th.

That weekend was blighted by a very public engine failure during Friday practice, further problems on Saturday, and finally a gearshift problem in the race.

Anything beyond that for KTM is a good outcome, before we learn even more about the package when Smith and Espargaro jump on next week.

Valentino Rossi and Jorge Lorenzo learned from each other in MotoGP