KTM technical director Sebastian Risse says the manufacturer's MotoGP debut at Valencia this weekend will simply be an extended test, before entering the championship full-time in 2017

Mika Kallio will ride KTM's RC16 as a wildcard, with current Tech3 Yamaha pair Bradley Smith and Pol Espargaro signed for the full programme next season.

While KTM has tested largely in private since running for the first time last November, it was buoyed by its form against the bulk of the field in a test at the Red Bull Ring in July.

However, rather than setting expectations for Valencia, Risse says procedures will be the focus.

"It is extended testing; not only on the technical side of things.

"To run a race team is beyond the technical and so there are things we also want to prove that cannot be done in a test situation - however much you go testing.

"So this is the first real test of the team, in that aspect.

"So when the lights go out at Valencia, we will get a real experience of all our technical work and team preparation.

"Nothing beats the pressure of a race to create a real test."

While KTM's current testing machine is its first MotoGP bike, it had a shortlived involvement in the class in 2005 as an engine supplier to Kenny Roberts' outfit.

Risse says KTM has drawn on experience from a range of projects, such as its Moto3 programme that sealed its third title in 2016 with Brad Binder, including sticking with its regular steel trellis frame, rather than the aluminium frames commonly used in MotoGP. 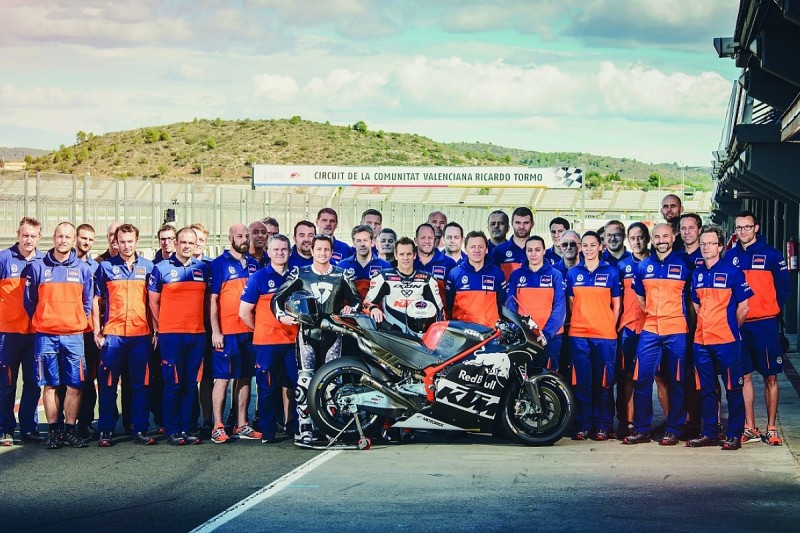 The bike raced at Valencia by Kallio will essentially be an update on the original prototype, before a new bike is introduced this winter.

"When you are basically starting from scratch, you have to give the right priorities to certain technical aspects before you've even been on track," Risse added.

"There are so many things to consider, and all this has to come together in the right way.

"Normally the best way to find out if something is an improvement is to go out on track test and prove it. Everything else you can talk about for hours and days.

"But in the end, proof on track is for me the only way to make sure that you are going in the right direction.

"Of course in the first phase with the RC16 this was not possible as there was no bike. So you have to do it in a different way; benchmark a lot.

"Try and understand why other manufactures have done this or done that to help give you the right approach to the problem.

"It's not about copying, but understanding the reasons why or why not, and then from there we needed to find our own way."