Marc Marquez says he “will suffer” in his first MotoGP race in nine months in Sunday’s Portuguese Grand Prix as his arm felt “worse” during qualifying.

The six-time MotoGP world champion hasn’t started a grand prix since last July’s season-opener at Jerez, and hasn’t seen a chequered flag since he won the 2019 Valencia GP.

Coming through Q1 – courting some controversy from Joan Mir over his tactics – Marquez went on to qualify on the back of the second row in sixth place.

Marquez admitted he felt "worse today", which was expected, but he was pleased with the confidence he found in the bike having worked to adapt the RC213V to his preferences.

“The confidence on the bike improved a lot, and also for the team,” he said.

“We start here with [Stefan] Bradl’s base, Honda base and in FP1, FP2, FP3 I ride with that bike, with that electronics, with everything same but then immediately after FP3 I say, ‘okay, now I'm ready to try things and we already start to change the bike more for my riding style’.

“It's not something very big that the other riders aren't using, not something extreme, but already adapting the bike to my riding style to what I need now, and already the step was big in FP4 in terms of feeling of the bike.

“And then in qualifying I was able to be fast.

“The question mark is tomorrow on the race, 25 laps will be very long and I would say I will try to enjoy but I know that I will not enjoy.

“I will suffer, but this is like this and we already know that we are coming here in Portimao and now we are more in the middle situation about the arm.” 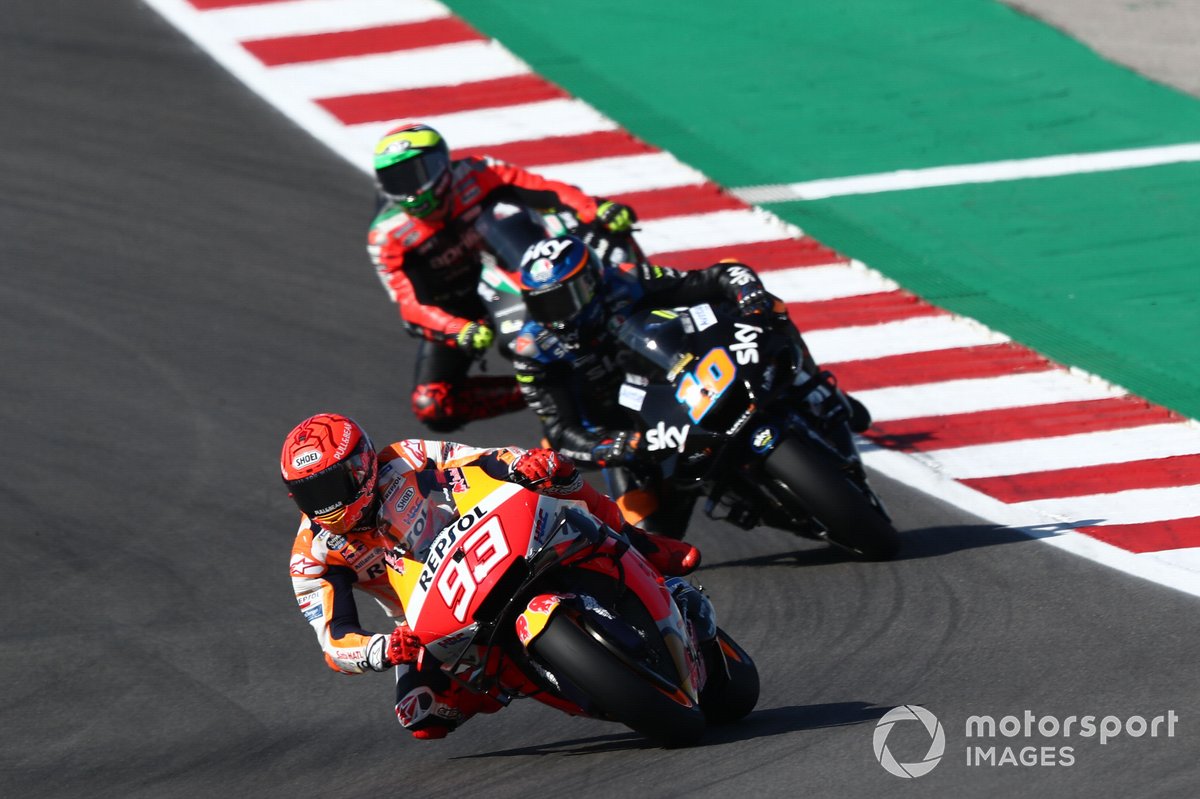 Marquez had several front-end moments during practice in Portugal, but says this is largely down to him lacking in muscle in his arm to load the front more.

“The main difference is my position on the bike,” he added.

“On the right corners, still I'm pushing too much on the brakes because on brakes that is where you can play with the front tyre.

“So, this is something that I am losing a lot, for example in the last two long corners because I cannot be there and I cannot push.

“We know and the team also know that now maybe we need to set-up the bike in one way and then when I will be ready to push we will set-up again another way.

“It's lack of muscle. Lack of muscle, power I mean, I cannot say 10 percent because it is difficult but at the gym I'm working with different weights on the left and right [arm].

“I cannot have the same weight on the right arm and then on the bike also this is something that is there and nearly all the corners are right on this circuit and at Jerez.

“But I need to do laps and I know that tomorrow I will suffer, but then I will have next week to recover again and Jerez a little bit more and it's like this.”