Six-time MotoGP world champion Marc Marquez admits he doesn't know when he will make his return to racing from injury, and confirms he will not ride in the Qatar test

The Honda rider broke his right humerus in a crash during last July's Spanish Grand Prix, and has been out of action since making an aborted comeback at the following week's Andalusian GP having just undergone surgery.

Marquez has had two operations since, the latest in December - where he underwent a bone graft - finally pointing his recovery in the right direction.

His third operation was thought to come with a six-month recovery period, but HRC has yet to give an official update on this.

Speaking during Honda's 2021 launch presentation video, Marquez admits he nor his doctors know when he will be able to ride again.

"Yeah, of course step-by-step I feel much better, and the recovery is going in a good way," Marquez said.

"Every time I go to the doctor, normally we have good news.

"That is really important because last year was quite long and tough. But now just we try to follow my body, with the physio, with the doctor, try to increase a little bit the work at home.

"The most important thing is every week - not every day - but every week I feel a bit better and I'm optimistic to be on the bike as soon as possible.

"But I don't know exactly when will be the day."

When asked by Autosport if he had a goal in mind for when he thinks he can return, Marquez hasn't ruled out racing in the Qatar GP - but will take it race by race and base his ambitions on advice from doctors and how this will affect his training. 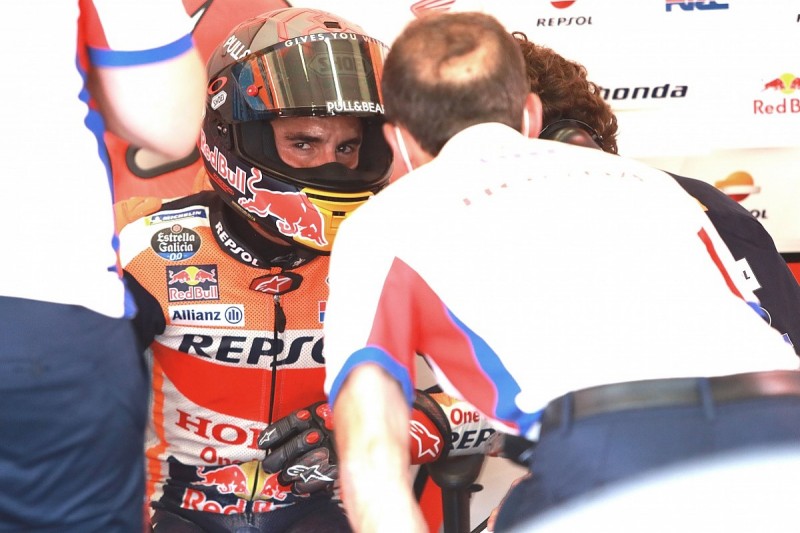 "Yeah, of course at the moment I don't have an idea," he said.

"But always I try to be optimistic and I try to have the next goal.

"So, my goal was try to be on the Qatar test. I will not be in Qatar test, but during that week I will have a doctors check and then my second goal will try to be in Qatar race.

"Of course, it will take time... I'm already working, but not in an aggressive way.

"And when the bone consolidation will be ok, when the feeling is 100%, then I will try to continue working in a good way to recover all the muscles and try to be in a good condition to ride the bike.

"Then when I feel the bone consolidation is fine, my muscle condition, my physical condition is in the correct way - not 100% because this will take a lot of time, but in a correct way to ride a MotoGP bike I will do."

When asked what version of Marquez can be expected when he returns, he replied: "It's the first time in my life, my career, that it's been nine months, 10 months without [riding a] bike, with a big injury.

"We will see. Of course, I imagine the best comeback, which is starting again and being the same, but it will be difficult to be like this.

"But we will see if it takes one race, two races, half season to be the same Marc [as before]."

Honda takes the covers off its 2021 MotoGP challenger