The Honda rider dominated a delayed wet qualifying in Japan by over two tenths to score his first MotoGP pole since the 2019 Motegi round – 1071 days ago.

Marquez is still rebuilding his physical fitness following a fourth major operation on the right arm he badly broke in 2020, which forced him out for three months between the Italian GP and last weekend’s Aragon round.

With Sunday’s Japanese GP expected to be dry, Marquez doesn’t believe he will be able to maintain strength in his right shoulder through to the finish to be able to fight for the podium.

Asked if he was ready to run at the front on Sunday, Marquez said: “No. I mean, tomorrow we will come back to our natural place right now.

“Always when I have a small chance I will try because I’m like this and my character is the same as when I arrived in MotoGP.

“But tomorrow will be a very long race. I already felt on Friday that here I will struggle to be consistent and attacking all the laps.” 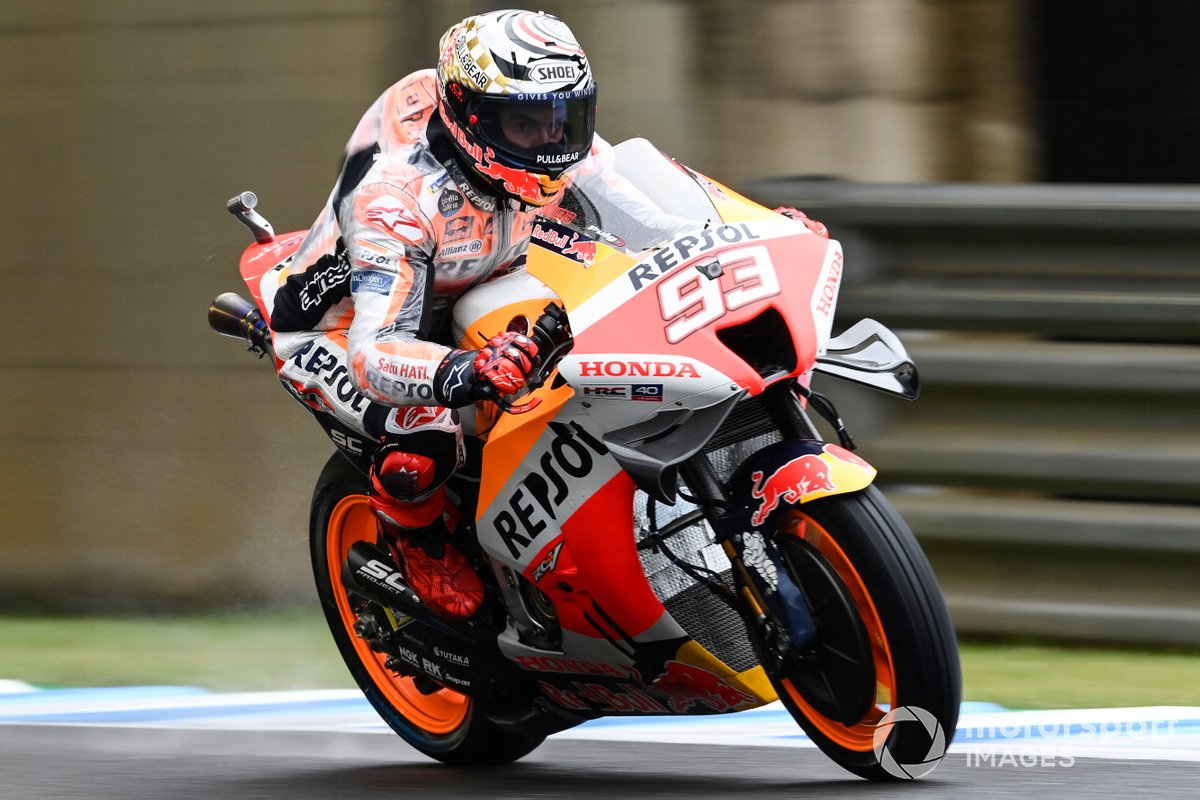 Marquez’s Motegi pole marks Honda’s first since Pol Espargaro topped qualifying at Silverstone last year, while the marque has gone without a podium since Qatar this year.

Though he is keen to downplay the significance of his comeback pole, Marquez admits Honda “needs these small achievements” to remain motivated for 2023.

“But in the situation we are in right now with the team, with Honda, struggling a lot this 2022, it’s a really good news for us because we need these small achievements, these small motivations and this fresh air inside the box is what we need.

“It was the time to do it, especially when in Fp2 I was riding in easy mode and the lap time was coming, I said ‘ok, if it’s wet in the afternoon I had a big chance’.

“I tried to attack and I did a good lap – I didn’t exaggerate it, but it was enough to be on pole position. Sometimes in the wet when you exaggerate you go slower.”

The six-time MotoGP world champion also admitted his running in the wet on Saturday in Japan was the first time since he broke his arm that he could ride in the way he wanted.

“In wet conditions, today was the first day that I rode the bike like I like,” he said.

“I mean, last year on wet I was competitive but I was riding in a strange way and I didn’t feel comfortable on the bike.

“And I didn’t understand how the lap time was coming. But today I confirmed my arm position was in a perfect way, and I was able to brake like I wanted, go in and pick up the bike and I’m very happy for that.

“Why I can ride in wet conditions better than dry? It’s because the effort on the muscles is less, and then I can keep my arm in the position that I like.

“Then in dry conditions it’s more difficult, I’m still not ready to attack all the laps. And in the wet, the weak points of the bike is less.”