As the race kicked off in damp conditions, Marquez, lining up on pole, was the only top MotoGP rider to opt for the soft wet rear tyre.

The reigning champion looked in serious trouble right away as a consequence, as he slumped to 10th by the end of the second lap and came into the pits to change to his second bike, equipped with slicks.

The move ended up deciding the race as he was immediately quicker upon rejoining the track, and, by the time those ahead of them had also visited the pits, he was left with a comfortable lead of around 20 seconds.

Asked after the race if his erroneous initial tyre choice had set up his dominant victory, Marquez conceded that it had - as he had not been planning to pit until "four, five laps in".

"Today - same. I put the soft [rear]. From the top guys I was the only one. I wanted to take the risk.

"But then when I go out, I realised it was a mistake. And this created [the situtaion] to go in very, very early." 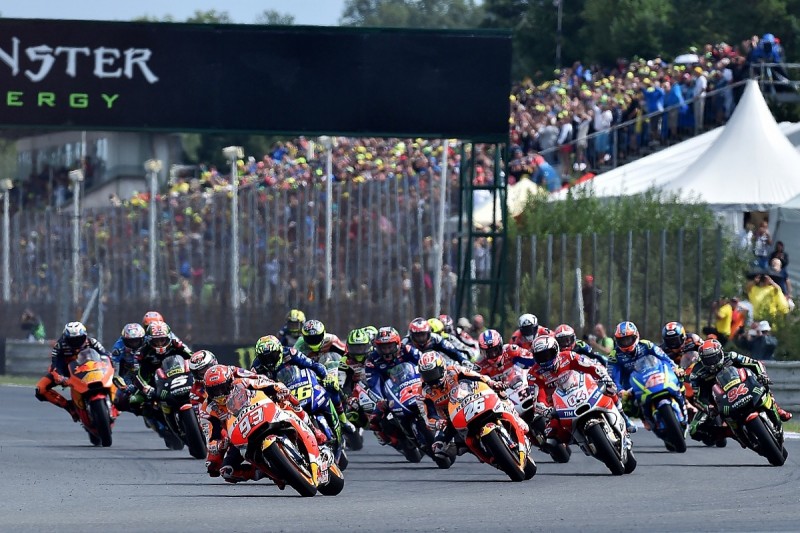 "We know in these conditions that he's very strong, so he usually makes the correct choice."

Suppo dismissed suggestions that Marquez might have slowed intentionally to prevent his main rivals from seeing him enter the pitlane, with the rider himself reiterating that his struggles with the soft rear tyre were genuine.

"The rear tyre was spinning too much, was too soft and I was losing many many positions," Marquez said.

"[Pitting early] was the only chance that I had - and when I go out on slick tyres, it was still very, very wet.

"I nearly crashed three-four times in the first lap especially, but then I cool down a little bit, I start to warm the tyres well.

"I don't know which lap but I passed the [start-finish] straight and I saw "P1, +18 seconds" - and then the sunshine comes, everything was better, everything was more clear on the track and I started to ride well, ride smooth and just arrived to the end."