Lorenzo's victory allowed him to beat Rossi to the crown by five points, and the Italian angrily accused Marquez of sitting behind Lorenzo to assist his countryman's title bid.

Marquez, who was also booed on the podium by some sections of the crowd, vehemently denied this was the case.

"Of course I respect all the opinions, and I accept when I win and when I lose, but with my mentality, when people say that you didn't try to win the race, you just tried to disrupt someone else, I feel insulted," he said.

"And I always did and I will always do it like this."

Marquez said the pre-race tension had generated such a spotlight on his actions that neither he nor Honda team-mate Dani Pedrosa would have risked any improper conduct.

"For me and Dani the race was a big pressure," he said.

"And that happened. Of course I do not agree [with the accusations].

"I finished just two tenths behind Jorge and I tried 100 per cent to prepare for the last laps but in that overtake with Dani we lost half a second and it was impossible to recover."

The controversy was further stoked when Lorenzo suggested in initial television interviews that the Honda duo had helped ensure the title stayed in Spain.

Lorenzo said he made this remark before understanding the Hondas' own issues in the race.

Marquez and Pedrosa were slowed early on by their tyres overheating, and felt they were losing out to Lorenzo's Yamaha on acceleration.

Although Lorenzo then suffered with rear tyre wear in the closing laps, Marquez argued his passing attempts were stymied first by a yellow flag at the area where he was quickest and then by Pedrosa battling with him for second.

"It's true that I said that at the beginning of the interviews, but I couldn't see the race from the outside," Lorenzo said.

"I just knew my difficulties to stay on the bike with the rear tyres and doing 1m32.0s, so I could get this conclusion [about the Hondas].

"But Dani and Marc explained very well and everyone saw the race from the outside.

"I could not have a clear opinion and I just have to trust what they say." 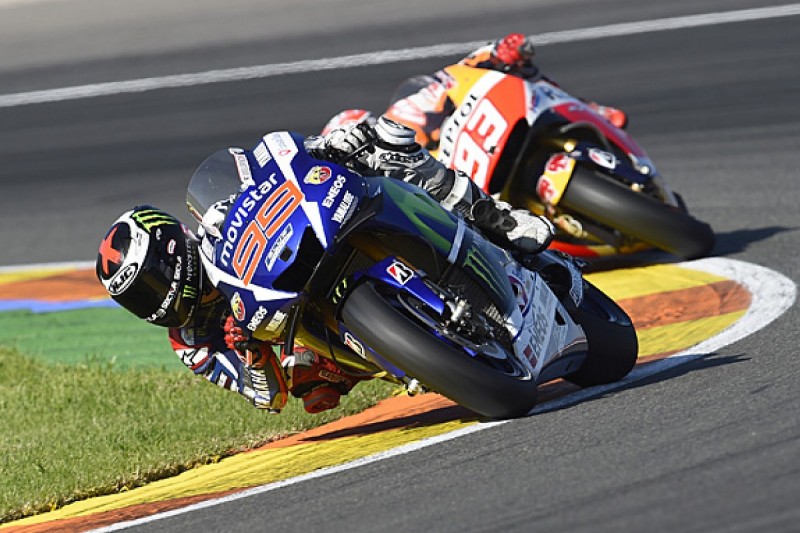 Jorge Lorenzo: I deserve MotoGP title regardless of controversy