Marquez won the championship in 2013 as a rookie and successfully defended it in a dominant '14 campaign, but had a hit-and-miss '15 season punctuated by crashes that kept him out of the title fight, and was then involved in a high-profile row with Yamaha's Valentino Rossi.

The 23-year-old has headed the points for the bulk of 2016 - taking the lead for good in June - and victory in the Japanese Grand Prix last Sunday was enough to wrap things up with three races to spare.

Marquez admitted a string of four races after the summer break without a win and just one podium, as Rossi chipped away at his lead made him "a little bit nervous", before responding with victories at Aragon and Motegi.

"In 2013 I didn't feel the pressure, but in this championship I cannot explain the pressure," the Honda rider said.

"It's something that maybe I didn't understand before this year.

"This year I felt it, and even my team said, 'hey, Marc smile, you're not the same Marc, you must enjoy it'.

"Sometimes I forgot to enjoy it, because the pressure was too high.

"The pressure I felt, especially at start of the season, was really high.

"Last year we did a few mistakes, and I don't like to finish a championship like last year. The end of the championship was hard." 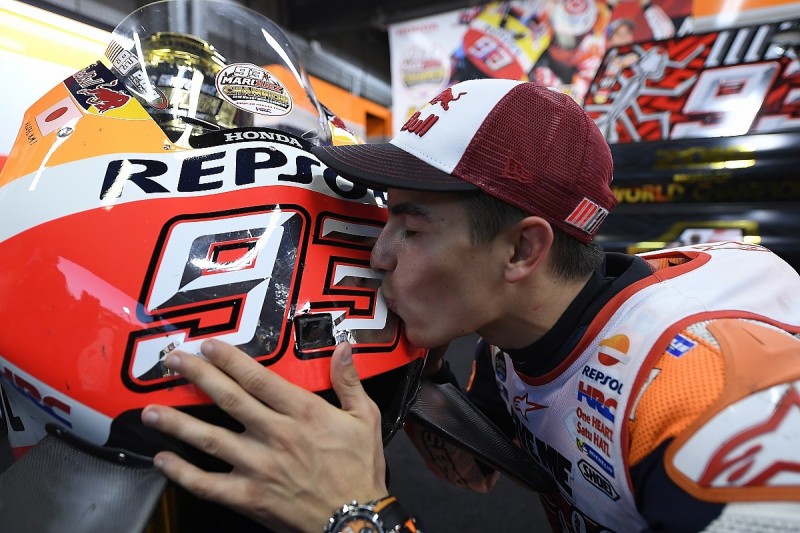 With five victories, Marquez has won more races than any other rider this year, and he added that the lessons learned in 2015 helped him stick with his new, more conservative, approach this year.

From 15 starts, Marquez has sixth other podiums, two fourth-place finishes, a fifth and even scored points for 13th in his worst race of the year, at Le Mans where he crashed but was able to remount.

By comparison, Rossi has four DNFs this year and his Yamaha team-mate Jorge Lorenzo recorded three.

"At Le Mans I made a mistake trying to push more than what I felt on the bike," Marquez said.

"Last year I paid an expensive price to learn that maybe consistency is important too.

"I learned, I tried to use it this year, but of course you must take risks.

"I crashed many times in practice, and I tried to find the limit in practice and think in the race where was the limit and keep my position."