Iannone crashed during practice at Misano five weeks ago, fracturing the T3 vertebra in his upper back.

The Italian attempted to return at Aragon a fortnight later but withdrew after the first session, with Avintia Ducati regular Barbera called up for this weekend's Japanese GP when Iannone's planned comeback failed to eventuate.

Stepping up from his usual GP14.2 Ducati to the current 2016 model, Barbera qualified eighth at Motegi, and he occupied that position when he fell at Turn 1 on lap nine.

"It was a fantastic opportunity to ride the 2016 Desmosedici GP and race for a factory squad like the Ducati team and so I want to thank both Ducati and Avintia Racing for giving me this opportunity," Barbera, who remounted and finished 17th, said.

"It was all new - in fact, I didn't know either the bike or the guys in the team, but after every session the situation improved a lot.

"Unfortunately in the race I was not able to get a good start, especially because the clutch is very different to the one I normally use, and I immediately lost two positions.

"I took a bit of time to pass [Danilo] Petrucci and then I caught Pol Espargaro, who I tried to overtake several times, until I tried with even more decisiveness and unfortunately I crashed.

"I feel bad about it because I think that today I could have finished in fifth or sixth place.

"However it was a great experience and I am very happy that I have been given another chance next week at Phillip Island."

Avintia drafted in reigning Australian Superbike champion Mike Jones to make his MotoGP debut on Barbera's bike and after finishing 18th at Motegi he will get a second start on home soil next weekend. 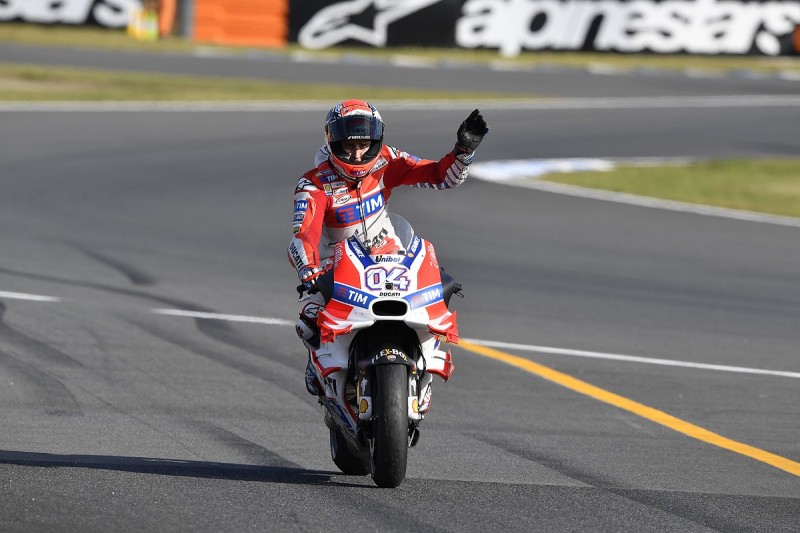 Ducati regular Andrea Dovizioso recorded his fourth podium finish of the season with a second-place finish, having been closing on Yamaha's Jorge Lorenzo even before the Spaniard crashed with five laps remaining.

"I started quite well but was boxed in by Valentino [Rossi] at the first corner and lost several positions and above all contact with the leading trio.

"I remained calm however and began to get closer to Lorenzo lap after lap.

"I am very pleased with the feeling I had with the bike and with how I managed the situation.

"I couldn't take too many risks because it was very easy to crash, but I was able to be constant throughout the race and with a good pace, and get an important result for both me and Ducati."