A week after dislocating his left shoulder at the Red Bull Ring, Marquez lost the front end of his RC213V at Brno's Turn 13 but - not for the first time this year - managed a miracle recovery.

The championship leader hung off the left of his bike and used his knee to push himself back up as he regained front-end grip and avoided an accident.

It drew comparisons with his massive save at Brno in 2014 (pictured on Marquez's phone below), during MotoGP's post-race test, which Marquez said was a bigger moment.

"When I lost the front, the first moment I thought, 'this is a crash'.

"I was lucky because I could a stand [up] the bike a little bit, but the front was still closing.

"When I was there, I was with the knee pushing on the floor, and in the end I was able to save it.

"Sometimes I say you must be lucky to save that, but already many times [I've done this]... so something is there. 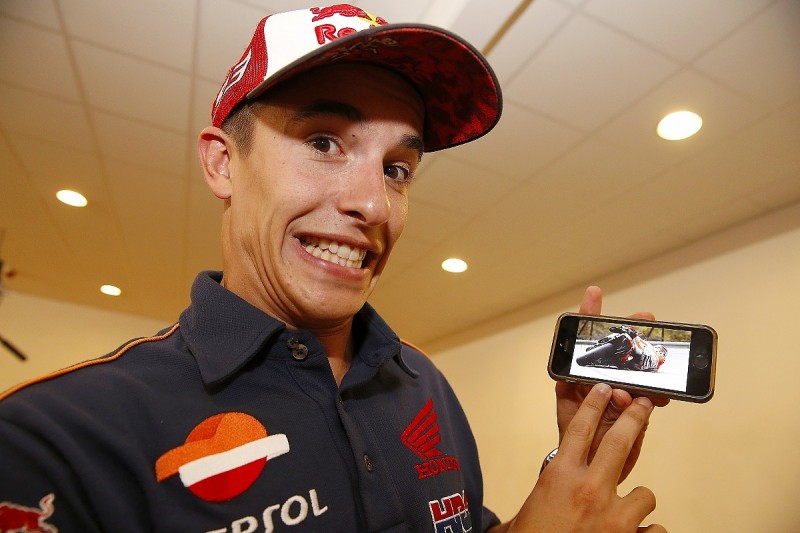 Marquez led the way in the session, based on a late run on fresh tyres, but appeared to lack the same longer-run pace as a group including Yamaha pair Jorge Lorenzo and Valentino Rossi, Ducati's Andrea Iannone and Suzuki's Maverick Vinales.

Rossi declared Marquez's pace in the context of the weekend a "question mark" and the Spaniard admitted that top spot was "not my real position".

"In the end I was able to push, for two or three laps well," he said.

"But we must improve with the used tyres, we must improve the rhythm because it looks like both the Yamaha riders are able to keep a good pace, also Iannone and Vinales."

Austrian GP winner Iannone was Marquez's closest challenger after setting the pace in the morning session, finishing 0.104 seconds behind than the Honda rider.

On their fastest laps both set in the closing minutes, Iannone was quicker in three of the four sectors, but conceded 0.539s to Marquez in the twisty second sector.

"Two tenths is because I could possibly improve," Iannone admitted.

"But the other three tenths, it's very important to try to improve the bike, because when we stay in the corner and it's very, very slow to turn the bike.

"We want to try to improve this part and I hope with this, the situation is better."