Just one tenth of a second split the factory pair at the end of the 15 minute session with Tech3 rookie Zarco snatching third after the chequered flag.

Vinales set the early pace with a 1m33.134s that was nearly one second clear of the pack initially and served as the fastest time until Cal Crutchlow turned a 1m32.644s and then 1m32.414s.

As riders started their final laps, Crutchlow was still on provisional pole until Vinales lowered the benchmark to 1m32.146s with two minutes remaining.

The Spaniard had more to come and then set a 1m31.994s to top MotoGP qualifying for the first time in his career, his maiden pole in Qatar earlier this year having been based on practice times after a washout.

Championship leader Rossi was a threat throughout the session, and ultimately finished 0.106 seconds shy of his team-mate.

Zarco stayed out for all of Q1 on the same soft tyres, and he led the way for the bulk of the 15 minutes in front of his local fans.

But he was then demoted to third by Andrea Dovizioso and Dani Pedrosa at the very end and looked set to miss out on progressing to Q2, only to bounce back after the chequered flag to displace Pedrosa by 0.069s.

That means Pedrosa will start 13th, three places ahead of Jorge Lorenzo, who also failed to progress and finished half-a-second behind team-mate Dovizioso in Q1.

Zarco was in the thick of the late drama again in the main session, turning a 1m32.229s after the chequered flag to bump Crutchlow off the front row of the grid and eclipse his previous-best MotoGP qualifying position of fourth. 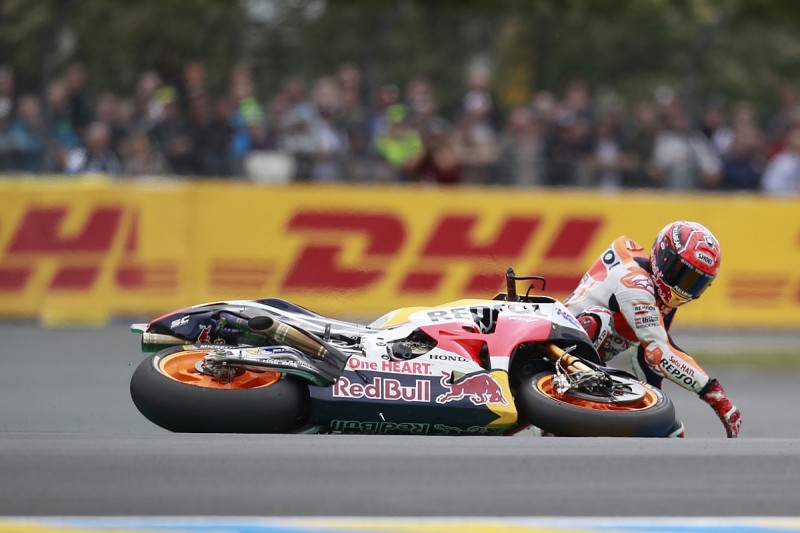 LCR Honda rider Crutchlow will start fourth ahead of stablemate Marc Marquez, who had a low-speed crash at Turn 3 in his first run and ultimately finished 0.449s off the pace set by Vinales.

Dovizioso will round out the second row of the grid, while practice pacesetter Scott Redding was seventh after crashing late in the session on his Pramac Ducati.

Having made Q2 for the first time in KTM's short MotoGP history based on their efforts in the drying third practice session, Pol Espargaro and Bradley Smith qualified eighth and 10th.

Jack Miller contested qualifying despite a massive crash in fourth practice, the Marc VDS Honda rider also falling at Turn 14 during the main session and having to settle for 11th.

Aprilia pair Aleix Espargaro and Sam Lowes both fell in Q1 and will start 18th and 21st, with Sylvain Guintoli completing the order standing in for Suzuki's injured Alex Rins.