While Espargaro has shown impressive pace since joining Aprilia from Suzuki this year, he was only 17th in the standings heading to his home race at Barcelona.

Three mistakes in races contributed to that, but he also lost a likely sixth-place finish at Le Mans when an engine expired.

Espargaro qualified fifth at Barcelona, with an expectation that an RS-GP that is kind on its rear tyre would thrive in the race given the hot conditions.

Having moved up to fourth at the start, Espargaro fell back to 10th with an engine problem before the bike eventually stopped.

"Very pissed off," he said. "We did a great job all weekend.

"We had a good pace to fight for a top five, I think, maybe even for a place on the podium, but from the start I felt that the bike was not working.

"I did a good start but then the bike was a lot slower than in the warm-up, it was not revving normally, and I was expecting the engine to stop.

"The engine was destroyed. Four engines in the three last races. We need to understand what is going on.

"I think also that in Mugello, if I hadn't made a mistake and made a jump start, I would have pushed the bike to the end and then also would have had the same problem.

"Really frustrated. Really, really angry. Really disappointed, but this is racing, and I hope we can understand what's going on." 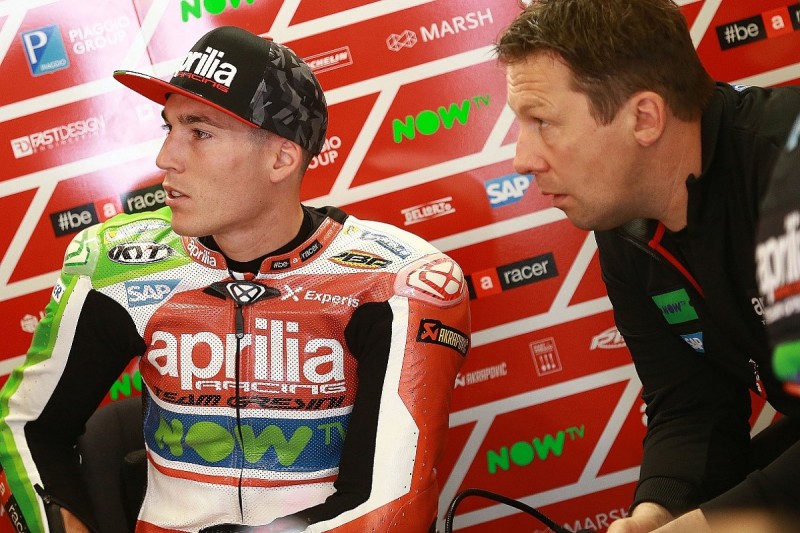 Espargaro also lost an engine on the Saturday at Austin, ceased using an older-spec engine at Mugello last weekend and then had another issue in third practice at Barcelona.

The problems have occurred on both the previous-specification engine and an upgraded version introduced for Espargaro at Mugello.

"The difference is small [between the specs], but we always broke the engine for the same reason," Espargaro said. "We don't understand why.

"I was very nervous at the beginning of the race, at lunchtime I couldn't sleep, because I knew I had the pace to fight for the podium.

"But from the beginning, the bike was slow, like in FP3.

"In FP3 I stopped, because I felt something strange, so I wasn't pushing and then the engine was broken.

"But obviously [in the race] I couldn't stop, so I pushed until the bike said 'stop, enough'.

"It's very difficult to always be in the top with MotoGP, but with Aprilia it's even more difficult.

"And we showed that we were very competitive, and yeah, no points again.

"We are almost the last in the championship classification, and I think it's not fair. We deserve more, but racing is like this."