Moto2 frontrunner Brad Binder will make the step up to MotoGP in 2020, after signing a one-year deal with KTM to join the satellite Tech3 team alongside Miguel Oliveira

Binder made his grand prix debut in 2011 in Moto3 having won a race in the KTM-backed Red Bull Rookies Cup, before winning the lightweight class title with the Austrian marque in '16.

He moved to Moto2 with KTM the following season, and won three races in the class last year on his way to third in the standings.

He currently sits eighth in the championship following back-to-back podiums in the Netherlands and Germany.

"It is incredible to have this opportunity," said Binder.

"I want to say a huge thank you to KTM, Red Bull KTM Tech3, my manager and my family for helping me get to the premier class and to be able to give it a try.

"It is an amazing feeling right now and a dream come true.

"When you are growing up then this is what you aim for - to be in the MotoGP class with the best riders in the world with the best bikes - so it is a crazy feeling right now."

Binder becomes the second rider to ascend the KTM ranks from RBR Cup to MotoGP after former Moto2 team-mate Oliveira, who sits 18th in the top class in his rookie campaign, having amassed 15 points. 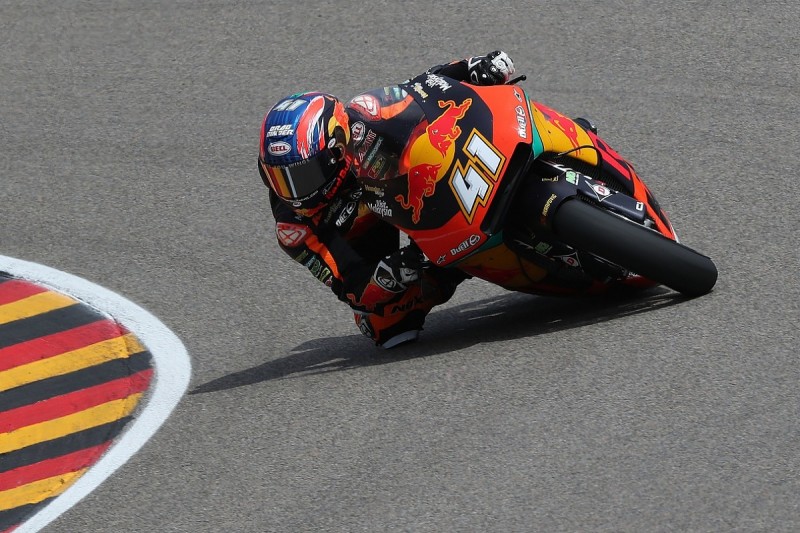 KTM boss Pit Beirer said: "To be able to sign Brad Binder for our MotoGP project is an exciting moment because he has been with us for five years already and is one of our world champions.

"We have a strong story and connection and we're really happy that it continues.

"It is clear we all have a big challenge in front of us and we also feel responsible for him to be able to maintain this good path we have together.

"We also like the fact that Brad has this distinctive riding style that allows him to push a bike and project to the maximum.

"We feel that he 'fits' to us, and we cannot wait to see how he handles and attacks a MotoGP bike.

"I'm sure he can add some extra and special things because he has done that with every motorcycle he has raced so far and it will be a highlight not only for us but for all MotoGP fans."

Works KTM riders Pol Espargaro and Johann Zarco have deals which extend into '20, though the latter's tough campaign has raised questions about his standing with the team.