The reigning world champion dislocated his right shoulder last Saturday when he crashed at 125mph at the end of Honda's private test at the Spanish Grand Prix venue.

Marquez said the test, which was cut from two days to one due to bad weather, was positive as Honda looks to settle on and then refine one of two versions of its revamped engine.

However, based on the crash, he will still feel some discomfort during the final three days of pre-season running, which start next Friday

"Jerez was a positive test, because we tried this new bike on a shorter, smaller circuit and it was really interesting," he said on Friday during an event for Spanish broadcaster Movistar.

"At the end of the day I crashed because the temperature was getting colder and I lost the front and injured my shoulder.

"This time it was the good one, because normally it's the left one.

"It was the right one this time, but step by step I'm getting better and better and maybe in the Qatar test I will not be 100% but very, very close." 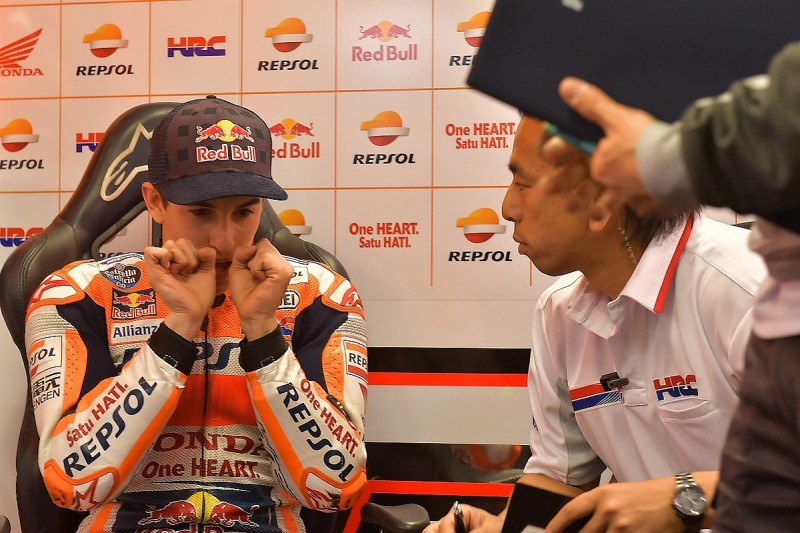 The Spaniard says Honda is in much better shape than it was at this point last year, when MotoGP's new control electronics were introduced, but concedes it has not made much progress since the end of last season.

Honda has an engine that was tested late last year, and a newer version considered to have more potential, but that is yet to be paired with its electronics.

Despite that, Marquez set the third-fastest time in 2017's opening pre-season test at Sepang, and was then second at Phillip Island, where he displayed strong race pace.

"Maybe the Honda we have right now is the one with which we finished last year, that is, the best Honda we had last year," he added.

"At this point last year we were very far, pretty lost.

"But this time we've started with a pretty good base."

Jack Miller has MotoGP options beyond Honda for 2018