Between stints with Honda's motorcycle programme, Nakamoto spent seven years with its works F1 team, and had risen to become technical director by the time he left at the end of 2008, when the team was sold to Ross Brawn.

Ducati has pioneered the use of winglets in MotoGP since the start of 2015, with other manufacturers having to follow suit and play catch up.

Rivals had reservations on safety and cost grounds and winglets were ultimately banned from the end of this season, after the Motorcycle Sports Manufacturers' Association failed to reach a consensus on their future.

Noting that at "almost all grands prix we are trying to change something different", Nakamoto said cost was his primary concern on the fairing winglets.

"Winglets are a new technology, a new challenge, and from a technical point of view it was quite interesting," he said.

"But at the same time, the development cost is huge if you start with this area.

"I have experience from this from Formula 1 - it was 24 hours, seven days.

"You use a lot of budget for this. For us the biggest headache is the development cost."

Ducati hit out at the verdict in the aftermath of the ban, and its MotoGP general manager Gigi Dall'Igna believes it will raise rather than cut costs, in the pursuit of "a new idea" to replace them. 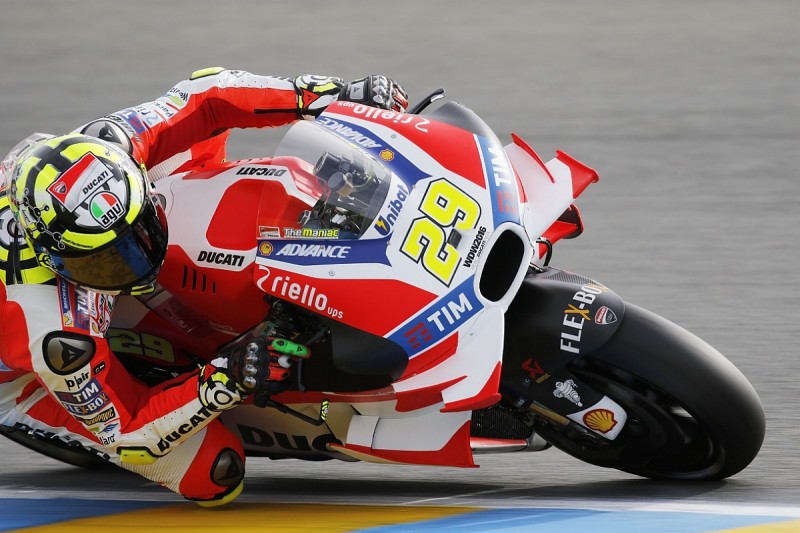 "Ducati is quite disappointed about these new rules," he said.

"In the MSMA we tried to reach a reasonable deal for the cost and the safety but if reasonable means wings one centimetre in length, it's better to have no wings.

"Next year we will have different aerodynamics and we have to develop a new idea, so probably the cost will increase, probably for everybody.

"This is something that we have to accept, but frankly speaking, I don't understand why we banned wings for next year."

Dall'Igna believes the ban is also bad news for the broader motorcycle industry, with MotoGP dropping winglet development that could have filtered down to road-going bikes.

"The motorcycle industry has to learn aerodynamics more," he said.

"The aerodynamics are really important, not as important as [for] cars, but it's important also for bikes.

"To ban winglets is a problem for the motorcycle industry."