Polesitter Marquez slipped behind Folger in the early stages of the German Grand Prix, but later re-passed the rookie and went on to win by 3.3 seconds - claiming his eighth successive win from pole position across MotoGP's three categories at the venue.

Folger shadowed Marquez for the majority of the race after losing the lead, running half a second behind the reigning champion until a mistake on lap 28 of 30 as his tyres 'gave up' forced Folger to settle for runner-up spot.

"I don't know what to say, really," said Folger, who secured his first premier class podium in his ninth MotoGP race.

"I was really strong and I could follow Marc quite well.

"I couldn't believe that we made a gap to the rest, I thought Dani [Pedrosa] was going to stay [close].

"I was behind [Marquez] trying to save tyres, suddenly I made one big mistake in Turn 1.

"I lost a little bit to Marc, I tried to recover and burned the tyre.

"I didn't have the lap time that he made in the last two laps but, really, I thought I can beat him today.

"I had a good rhythm but the tyre, two laps before [the end], gave up." 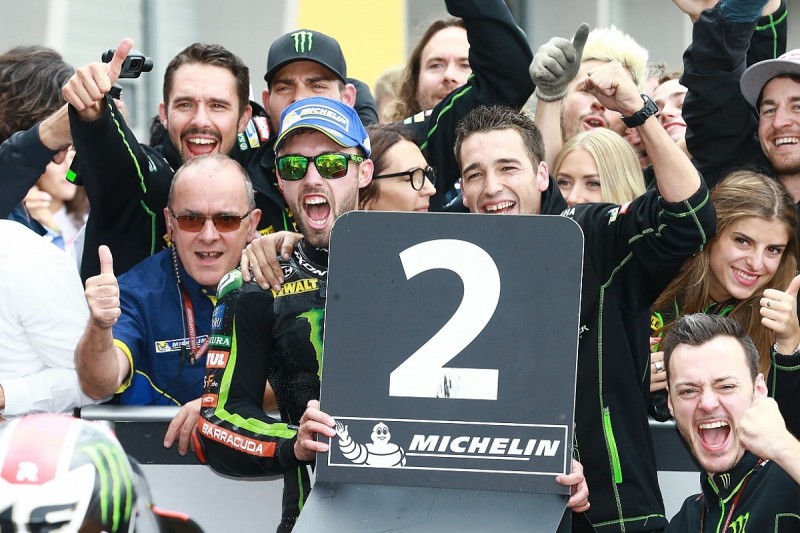 Marquez, who now leads the championship, said he was wary of the threat from Folger late in the race after his initial attempts to shake off the German proved unsuccessful.

"It was a really, really fast race; the rhythm was incredible," he said.

"I was riding really good even at the beginning but then suddenly I saw Jonas overtake me.

"I say 'OK maybe with the new tyre he's strong but maybe he'll drop the pace', but it was not like this.

"But then in the last five laps I tried to increase the rhythm.

"I improved my lap time two tenths, [and it] was enough to open a small gap."