Yamaha has confirmed five MotoGP team members, including team manager Massimo Meregalli, have been ruled out of the Valencia double-header due to COVID-19-forced quarantine

Maverick Vinales confirmed earlier on Friday at the European Grand Prix that one of his team members had tested positive for COVID-19, and he himself was awaiting the results of a PCR test taken earlier in the day.

Yamaha has released a statement confirming the positive COVID-19 test of a Vinales team member.

The Japanese manufacturer says the positive member immediately departed the Ricardo Tormo Circuit to begin self-isolation, while a risk assessment was undertaken to determine if anyone else had been placed in risk.

After a "thorough risk analysis", Yamaha deemed four more members of the team - including team manager Meregalli - have been placed into self-isolation until Monday 16 November.

Yamaha confirms the four additional members, including Meregalli (below), tested negative after Friday's PCR test and "will remain in close contact with the team" at the circuit to "offer their best support to the staff present at the track".

The team also says none of the rest of the squad, nor Vinales or Valentino Rossi - who himself is returning from a COVID-19 layoff - are at risk as a result of Yamaha's "strictness in adhering to COVID-19 precautionary measures". 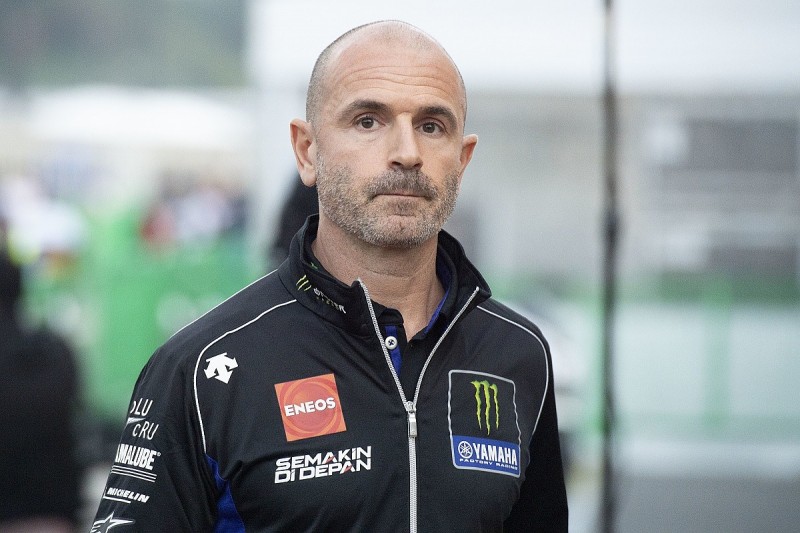 None of the absent five team members will be replaced for this weekend's European Grand Prix.

This comes a month after six members of Yamaha - including M1 project leader Takahiro Sumi - were forced to miss the French and Aragon GPs when one member tested positive for the virus.

Nine-time grand prix motorcycle world champion Rossi was forced out of the Aragon double-header after testing positive for the virus at home in Italy following the French GP.

After initially failing a COVID test on Tuesday, Rossi passed one on Thursday and travelled to Valencia, where he was cleared on Friday to ride from Saturday.

Yamaha drafted in World Superbike rider Garrett Gerloff to replace him, with the American ultimately getting his first taste of MotoGP machinery in practice on Friday.

He ended the day 19th overall, but was as high as fifth at one stage of the drying FP2.

Vinales missing crew comes as a second blow to his European GP weekend, after he was hit with a pitlane start for Sunday's race for needing to exceed his engine allocation for the season.