Ferrari had scored a key Misano double in September to enter the Valencia double-header with a 19-point lead over his nearest rival, Tech 3's Hector Garzo.

But while Garzo looked to have closed the gap to Ferrari by following race winner Eric Granado home in the first heat on Saturday, he was subsequently disqualified for running tyre pressures below the permitted minimum.

This meant that Ferrari entered the final race with a 20-point buffer over MotoGP podium finisher Bradley Smith, who remained as the only rider with a mathematical chance of denying the Italian the crown.

Smith needed a win to have any chance at snatching the title from Ferrari, but his second race in Valencia unfolded much in the same way as the first.

The ex-Tech 3 and KTM rider took the lead off the line from Granado and escaped to an early lead, but was caught up by the Brazilian heading into the final two laps. 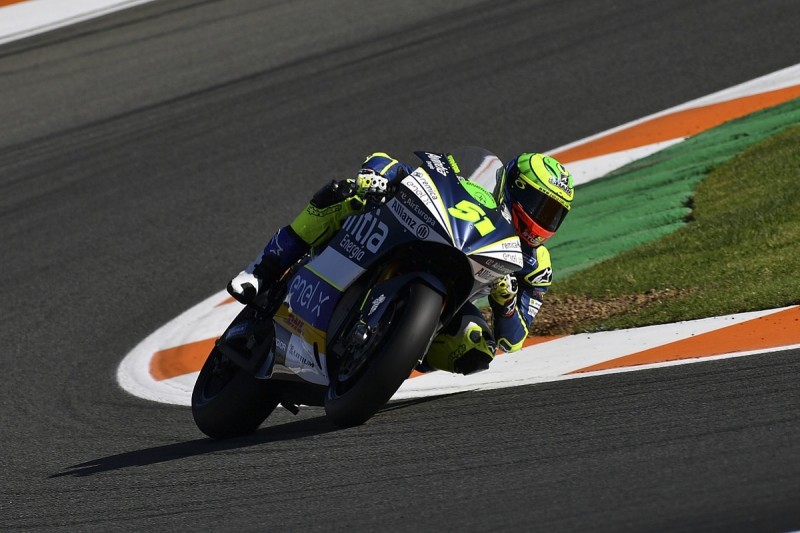 Granado overtook Smith at the fast Turn 7 left-hander and saw off a late lunge from the Sepang Racing-run rider to complete a Valencia double, making sure of Ferrari's title in the process.

The champion himself took the chequered flag in fifth, challenging Granado on the opening lap but ultimately yielding to Garzo and Pramac rider Alex de Angelis.

Former MotoGP star Sete Gibernau, who will depart the MotoE grid after one season, finished his final race in the category in seventh, losing out to fellow ex-premier class rider Mike Di Meglio on the final lap by 0.038s.

While Ferrari and Smith retained the first two spots in the standings, Granado leaped ahead of his teammate and ex-Avintia MotoGP rider Xavier Simeon for third.

Simeon crashed on the opening lap of the final race, his accident collecting Pramac's Josh Hook in the process.

Ferrari will remain part of the Gresini MotoE line-up next year, with a deal having been confirmed earlier this month.

The series had announced another six-race calendar for its 2020 campaign in October.