Pramac's Jack Miller led a drying FP2 for the MotoGP European Grand Prix by 0.092 seconds from the Aprilia of Aleix Espargaro

Most of the field headed out on slicks at the start of FP2 as a drying line had started to appear, which meant lap times tumbled in the early stages.

Championship leader, Suzuki's Joan Mir, set the early pace with a 1m41.581s and traded top spot with Ducati's Danilo Petrucci, before Pol Espargaro went fastest on the KTM with a 1m37.284s.

FP1 pacesetter Miller moved clear 10 minutes in with a 1m37.029s on his Pramac Ducati having almost come to blows with Maverick Vinales at Turn 8.

Miller's lap was bettered by sole Tech3 rider Miguel Oliveira with a 1m35.754s, though the Australian quickly reassumed control with a 1m34.613s.

Lap times continued to improve, with Francesco Bagnaia on the sister Pramac GP20, Oliveira, Suzuki's Alex Rins and Pol Espargaro taking turns at the top of the standings.

The latter's late time attack effort of a 1m32.952s stood as the benchmark for the final nine minutes, but came under threat in the closing moments as the field placed their bids for a provisional Q2 place with wet weather forecast for Saturday morning.

Franco Morbidelli beat this on his final lap with a 1m32.804s on his Petronas SRT Yamaha, though he was immediately beaten by Miller, who fired in a 1m32.528s to end the day fastest of all.

Aprilia's Espargaro jumped up to second to push Morbidelli down to third at the chequered flag, but he remains the leading title contender on Friday. 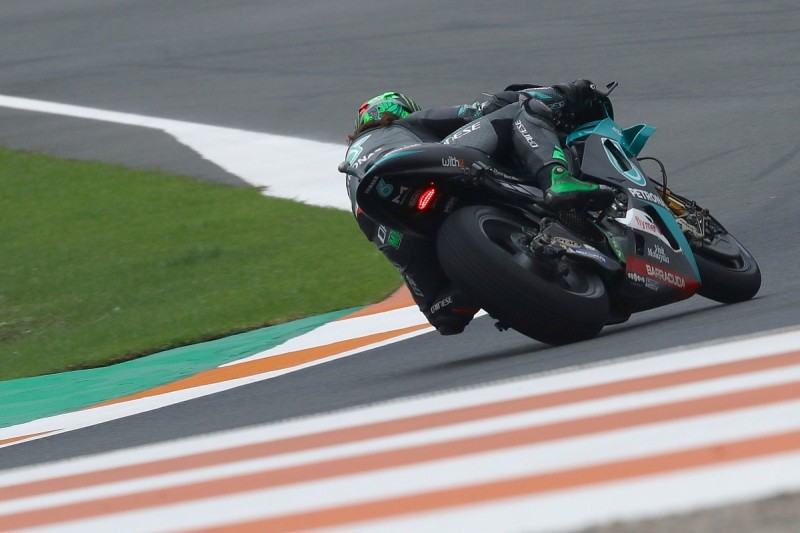 Takaaki Nakagami was fourth on the LCR Honda, with Pol Espargaro shuffled back to fifth ahead of Rins and KTM's Brad Binder - who will have to serve a long lap penalty on Sunday for his collision with Miller at Aragon last month.

Andrea Dovizioso was eighth on the factory Ducati, ahead of Fabio Quartararo, the SRT rider making a marked improvement from the morning when he was stone last.

Mir held onto the final provisional Q2 place on his Suzuki after improving to 10th late on with a 1m33.405s, though it came at the expense of Vinales.

It was confirmed during the session that Vinales will have to start Sunday's race from the pitlane as Yamaha has had to exceed his engine allocation to fit a sixth unit.

A late crash for Petrucci left the Ducati rider in 18th, with his efforts to run from the Turn 14 gravel trap back to his garage in the closing stages all for nothing as Ducati didn't have his second bike prepared.

He headed Valentino Rossi's Yamaha stand-in Garrett Gerloff, who was running as high as fifth at one stage before being shuffled back to 19th - albeit ending up just 1.5s off the pace.

Rossi cleared to return for rest of European MotoGP at Valencia