Ducati says it's 'not that important' to have Italian MotoGP riders

The majority of factory contracts are up for renewal at the end of this season, including those of Ducati's all-Italian line-up Andrea Dovizioso and Danilo Petrucci.

Speaking at Ducati's 2020 MotoGP launch event, Domenicali said it was important for the marque to show the strengths of Italian engineering but insisted Ducati simply wants "fast riders" capable of being frontrunners on its bikes.

"We have an official guideline that we made during the Q&A questions that we cannot speak about a year that is not 2020," Domenicali began, when asked about Ducati's 2021 rider plans.

"It was a little bit of a joke, but we would really like to focus on that.

"So, let's answer the question, 'How important is it to have Italian riders?' Let's say, not much.

"We want fast riders, so we are lucky because we have fast Italian riders. So that is a positive thing.

"But we built our history with Australian riders, Italian riders, UK riders - Carl Fogarty [in World Superbikes] was a fantastic piece of history.

"So, it's not that we start from nationality. Gigi [Dall'Igna, Ducati's general manager] is very clear on that, and I cannot agree more.

"We have a fantastic story with Andrea, who made an incredible number of victories with us, and he is three years in a row the vice-champion, which with [Marc] Marquez here it's kind of an achievement."

Ducati's 2021 options outside of its current roster dwindled last week, as Maverick Vinales and Fabio Quartararo - both of whom were linked to Ducati - committed to Yamaha. 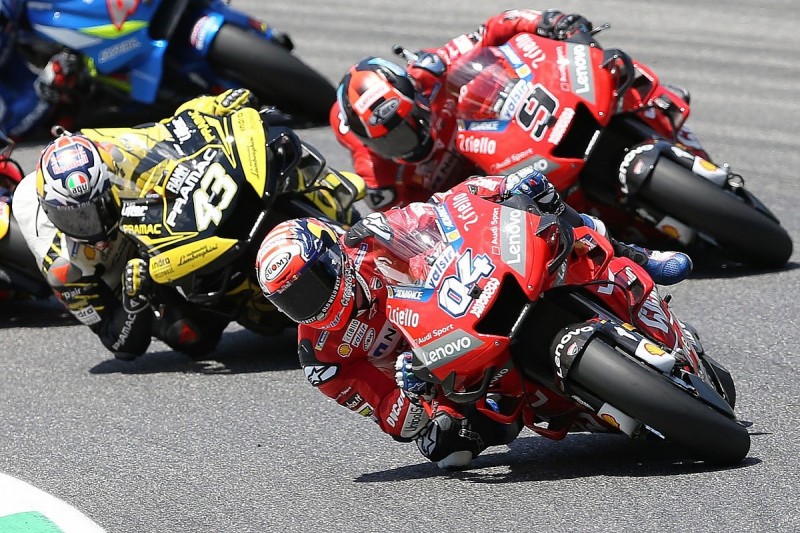 Another rider among those likely to jump onto a factory team Ducati next year is current Pramac rider Jack Miller, who will once again have machine parity with Dovizioso and Petrucci in 2020 having scored five podiums last season.

However, it remains to be seen how damaging Ducati's flirtation with the idea of bringing Jorge Lorenzo back to its fold for this season in place of Miller at Pramac has been in terms of the Australian's loyalty.

Asked about that situation at Silverstone in August, Miller said he had quickly moved on - though did admit an offer to join KTM in place of Johann Zarco for 2020 was "tough" to turn down.

Yamaha firming up its line-up with two sought-after Ducati options offers Zarco a better chance of a factory seat in 2021, as he gears up to ride a year-old Desmosedici at Avintia this year.

Now directly contracted to Ducati, Zarco made it no secret when his Avintia deal was announced that he had his sights set on a factory seat with the marque in 2021.

Should Zarco prove strong on the GP19 in the early part of 2020, Ducati - which pushed hard to get Zarco into its ranks with Avintia - may offer him direct passage back into a full works surrounding.