MotoGP race winner Danilo Petrucci will remain part of the Ducati factory team in 2020, the Italian manufacturer has announced

Petrucci was brought in to replace Jorge Lorenzo at the team on an initial one-year deal for 2019, and convinced Ducati to extend his tenure with the outfit through a solid start to the campaign, which included a maiden win at Mugello.

Ducati confirmed its intention to offer Petrucci a new deal in the middle of June, but the Italian rider admitted last time out at Assen that the two parties were yet to agree terms.

However, the extension was firmed up and made official ahead of the following weekend's German Grand Prix at the Sachsenring, meaning he will retain his spot alongside the returning Dovizioso.

"I'm very happy to continue with Ducati for another year," said Petrucci.

"It was my goal ever since the beginning of this new chapter, because we immediately found great chemistry with the team.

"In this first half of the season we were able to progressively increase our competitiveness, taking two podiums and an unforgettable win.

"To renew our collaboration before the summer break makes me even more serene and confident about the future." 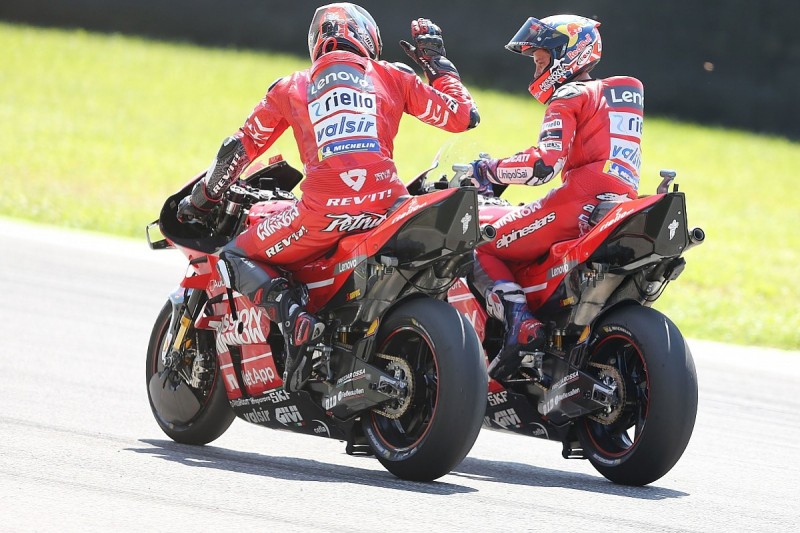 The renewal assures Petrucci of a ninth season in the premier class, and puts him in sync with the rest of MotoGP's factory rider market - with the contracts of all of his fellow works riders likewise set to expire at the end of 2020.

"We're very happy to have reached an agreement with Petrucci and to continue to work together on track also next year," said the Ducati team's general manager Gigi Dall'Igna.

"Danilo has shown his professionalism and talent ever since the first outings with the factory Desmosedici GP, and I believe his qualities are now clear to everyone, as evidenced by the strong results he already achieved this season, which culminated in a fantastic maiden win at Mugello.

"With Danilo on track alongside Andrea, our goal is to fight for the title, both in the riders' and the manufacturers' championships."

Pramac rider Jack Miller, who had been Petrucci's main rival for the 2020 works ride, remains without a deal in place for next year.

The Aussie is keen to continue on a works-specification Ducati for Pramac, but this would require the Italian manufacturer to supply two GP20 entries for its satellite team next year - for Miller and under-contract team-mate Francesco Bagnaia.