Subscribe
Previous / Ranking the top 10 riders of MotoGP 2022 Next / Marquez: MotoGP must not become like F1 where car is more important than driver
MotoGP News

Francesco Bagnaia ended a 15-year wait for Ducati when he won the world title at the Valencia finale earlier in November, the Italian overturning a 91-point deficit at the halfway point of the season to beat 2021 champion Fabio Quartararo by 17.

In the latter part of the campaign, Ducati did issue instructions to its seven other riders that they had to be mindful when racing Bagnaia and don't do anything risky for podiums and wins.

PLUS: Was the 2022 MotoGP title won by Bagnaia - or lost by Quartararo?

At the Malaysian Grand Prix, Ducati was accused of telling Gresini's Enea Bastianini not to overtake Bagnaia while battling for the win.

And while Ciabatti admits Ducati was perhaps "too fair" on Bastianini in that situation, he tells Autosport that any claims of team orders affecting a result this season were nonsense.

"Obviously this year in a few situations [there were nerves], because we knew Pecco was trying to do the impossible to come from minus 91 to close the gap on Fabio," Ciabatti said.

"We were quite nervous in some situations, in Misano and Aragon, and to be totally honest in Sepang.

"Sepang was a little bit different because we were seeing [Marco] Bezzecchi was closing the gap on Quartararo and if Bezzecchi would be third with Pecco winning we would be world champion.

"So, we were discussing what to do if Bezzecchi was third. But then Bezzecchi came to 0.8s [to Quartararo] and he started losing, so we said 'OK, we'll let it go'.

"Maybe we were too fair on Ducati's side to let it go [between Bagnaia and Bastianini in Sepang].

"But anyway, I think we showed that all the bullshit about team orders was bullshit, because if there were team orders Jack [Miller] would not be second in Thailand and Bastianini would not win in Aragon, or will not try to pass Pecco on the finish line in Misano, or even try to challenge him in Sepang." 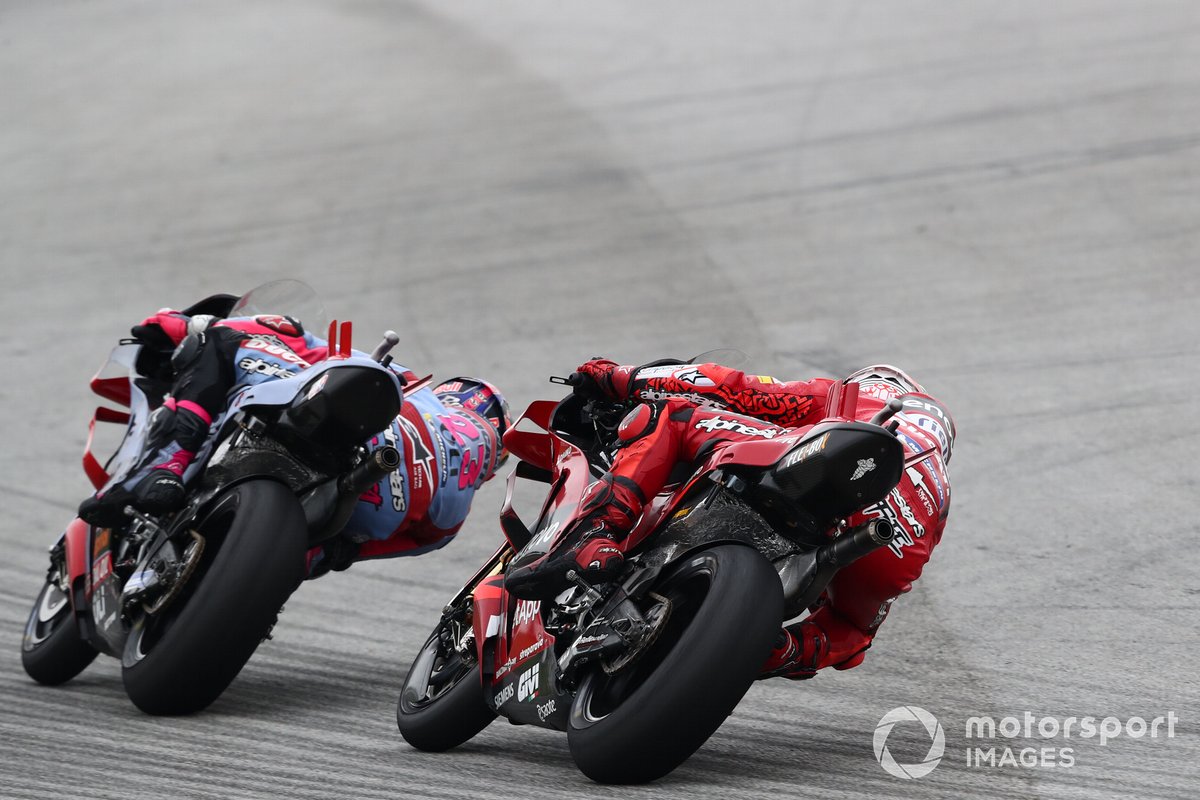 Bastianini will join Bagnaia next season at the factory Ducati squad, setting up a tense rivalry after the pair's numerous on-track battles in 2022.

But Ciabatti says this situation is a "luxury" and believes it will be able to manage any tensions that may arise between the pair.

PLUS: Ranking MotoGP's top 10 riders of 2022 - find out where Ducati's runners came

"Some people might think we will have a difficult situation to manage next year," he added.
"I think it's a luxury to have in your team the world champion and the third-classified [in the standings], and one won four races and the other seven.

"Between the two of them they won more than 50% of grands prix. I think it's a nice problem to manage.

"I think, I hope, we have the tools to manage the situation where they will be fair competitiveness between the two competitors in the same garage.

"But, I don't ask teammates to be friends, and Pecco/Jack situation I don't think can be repeated.

"It's one of those special relationships that is coming out of the character of the two riders, and Jack was already there when Pecco was a rookie.

"So, I think he helped him, and he's a nice guy. Next year we will have two riders who want to win the world championship. I think we will manage the situation."