Francesco Bagnaia and Jack Miller have both expressed an interest in Ducati hiring a MotoGP rider coach for 2022, with both mentioning double world champion Casey Stoner as an option.

Stoner is present at the Algarve Grand Prix this weekend and will also attend the Valencia race as a guest of Ducati.

The Australian, who won the 2007 world title for the Italian marque, has been out trackside spotting for its riders.

Bagnaia says Stoner’s feedback on Saturday allowed him to improve in the final corner, with the Italian going on to take pole for the fifth-straight race in qualifying in Portugal.

When asked if he’d like for Stoner to remain in a rider coach role going forward, Bagnaia said: “Could be a nice present from Ducati to have Casey as a coach next year.

“It’s a different point of view, he’s a legend and it’s different to have a coach, because in Ducati we didn’t have a coach and for me it helps a lot.

Team-mate Jack Miller echoed Bagnaia’s comments, and though he isn’t sure Stoner is a viable option for 2022, he feels Ducati does need to look at introducing a rider coach to its programme going forward.

“It’s fantastic to have Casey at the last two grands prix,” said Miller, who will start Sunday’s Algarve GP second.

“He’s got a family and lives on another side of the world, so the idea of that working out I think could be too hard logistically and whatnot. 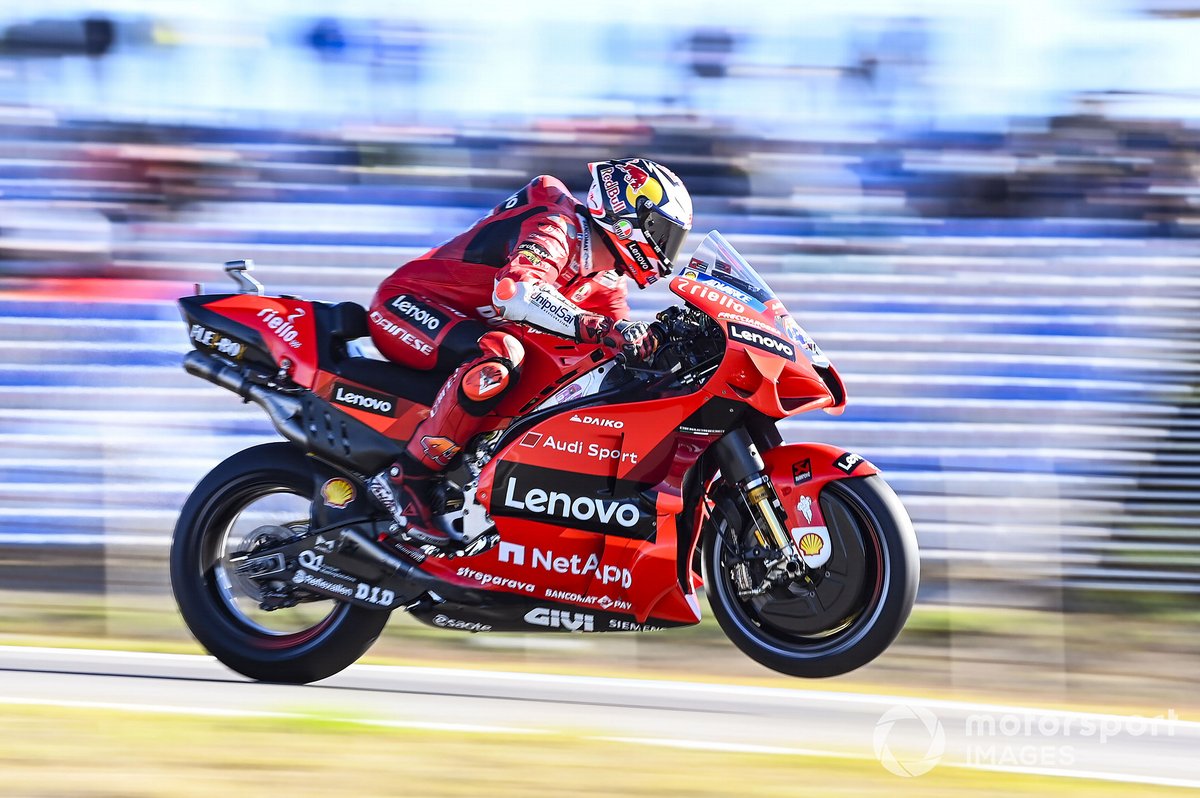 “But I’d be all for it 100%. But like Pecco said, it is really nice, I’ve worked with spotters on track and he’s not a normal spotter – let’s say it like that.

“I’m not saying we can get Casey, I’m more than happy to have him, but somebody.”

Commenting on his lap-record setting pole on Saturday, Bagnaia says improvements to how his Ducati behaved in the windy conditions played a key role in his qualifying success.

“I’m very happy because I enjoy a lot this weekend,” Bagnaia added.

“When you enjoy a lot with your bike, everything comes easily. Yesterday afternoon and today from the morning, with this type of wind I was struggling a bit.

“But we worked well and now I feel great also in the last sector, where the wind is more strong.

“And with both we were fast, so I think that our engineers are studying which one is better and I’m sure tomorrow our pace will be very competitive.”