MotoGP championship leader Andrea Dovizioso says his Ducati bike was "scary" to ride in the second practice session at Termas de Rio Hondo, which he finished in last place

The Italian was eighth in first practice at the venue, which has traditionally not favoured Ducati, before slumping to last in the second session, which he ended 3.6 seconds off the pace.

"I didn't enjoy riding the bike in the second practice, when you have to release the throttle in the acceleration because [of] the bike moving," said Dovizioso.

"It's scary and not the best thing."

Much of FP2 took place in damp conditions, but the session was also affected by wind, which LCR Honda's Cal Crutchlow described as "horrendous".

Asked whether his Ducati was particularly sensitive to the wind, Dovizioso said: "I don't know, it is always difficult to know this.

"Maybe, yes, but I can't say, and it is the sixth year I am riding this bike so to say OK, we have a negative point in this condition', I think is not fair.

"It was very difficult. I had to close the throttle in Turn 4 in the straight so it was scary.

"Apart from T4 all the other corners are much better, almost perfect."

Team-mate Jorge Lorenzo, who was 17th in FP2, said he did not feel "safe" going through the fast Turn 4 right-hander at full throttle - and argued the wind was to blame.

"I think the conditions from today, especially the wind, multiply a little bit the weak points of the new bike," Lorenzo said. 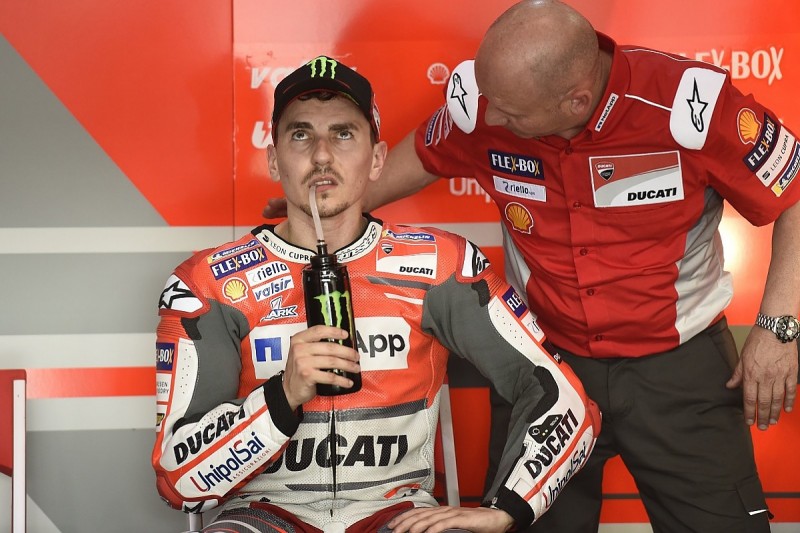 "That is that the front wheel is a little bit less in contact [with the ground] than the old one.

"So, for example, in the fast corner before the long straight I lose just half a second in that corner because I couldn't open full throttle, because I didn't feel safe enough to do it.

"And in the rest of the track also I didn't feel great. So... very strange conditions, special conditions, and today was like that."

With Dovizioso struggling even compared to other Ducati riders, the Italian admitted he had to bear some of the blame for the poor FP2 showing.

"Unfortunately it's similar as the past, this confirms in this kind of track for us is [more] difficult than other tracks," He said.

"There is also one part from my side. I didn't ride the bike in a perfect way - our bike is not the best for this track and this condition but some riders were faster than me. It means I didn't ride in my maximum.

"A few things together happened today and I didn't have a normal feeling to push and make a good lap time.

"This is not an excuse, this is the reality and we have to keep working - like in the past when we almost [finished] second [in 2016], we didn't start competitive from the first practice."