As Marquez won in Spain, Dovizioso - who had previously been level on points with him - trailed home seventh and fell 16 points adrift.

But Ducati's sporting general manager Gigi Dall'Igna said how hard Marquez - who crashed in Aragon qualifying - is having to push shows how the title battle could still change.

"Marc is a rider who takes a lot of risks, and only wants a result," Dall'Igna told Gazzetta dello Sport.

"Dealing with someone like this can be difficult, as we have seen.

"I don't think he has a lot of margin, and for this reason he's taken many risks.

"Someone who is making so many errors is always travelling close to the limit."

Dall'Igna believes Aragon was simply a weak venue for his team, and that the wet Friday exacerbated this.

"We did not lose the championship on Sunday," he said.

"I remain convinced that we will have plenty to say from now until the end.

"We knew that for Andrea and our bike Aragon would be difficult, and the time lost on Friday maybe was more important for us than for the others."

Dovizioso insisted falling 16 points behind Marquez was "not a drama" as "we know the points we can gain" in this season's four remaining grands prix. 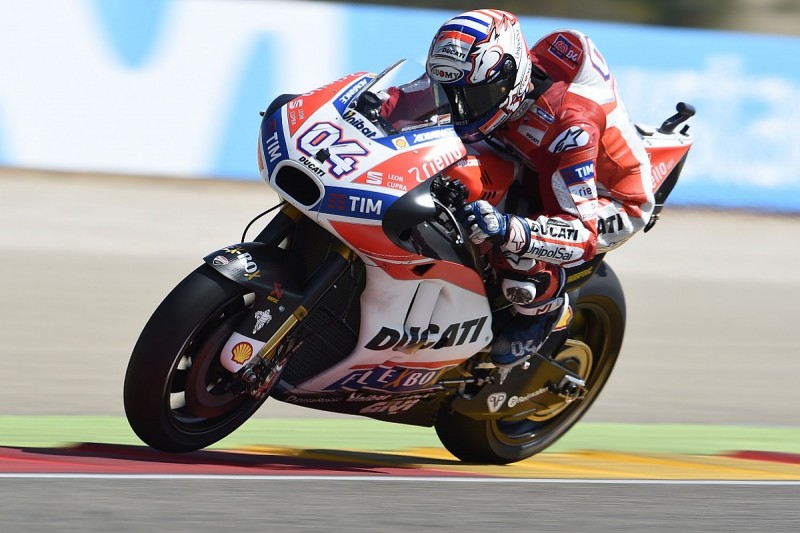 While his team-mate Jorge Lorenzo took his first podium for Ducati in third, Dovizioso said he was struggling at three specific points on the Aragon track - the long Turn 10 downhill left-hander, the Turn 15 left-hander leading on to the back straight and the final corner.

"Turn 10 it was the turning, Turn 15 it was acceleration, especially the wheelie, those two corners I lost a lot. Also the last corner I lost a lot, too much," said Dovizioso.

"And that created the problem, because in the race nobody could push because everybody had to save the tyre and not use 100%.

"But after 10 laps, Jorge started to push even more and Marc overtook me.

"I had to use the rear tyre to try to stay with them. So I finished the tyre too early and I couldn't be fast in the last 10 laps."