Dovizioso: Petrucci has made MotoGP self-belief breakthrough in '19

Andrea Dovizioso says his Ducati team-mate Danilo Petrucci lacked self-belief earlier in his MotoGP career, and feels Petrucci has made a breakthrough since understanding his strengths

Petrucci was signed by Ducati on an initial one-year deal after a long stint as a MotoGP privateer, and took his maiden win at Mugello last Sunday, beating Marc Marquez and Dovizioso.

Dovizioso and Petrucci began to train together in the off-season ahead of their first campaign as team-mates, and after the Mugello race Petrucci thanked Dovizioso for "adopting him like a brother".

Asked how he had benefitted from a closer cooperation with Petrucci, which seems to be making his team-mate a more dangerous rival, Dovizioso said: "I think Danilo improved this season because he believes in himself more, and he understood his potential, which in the past he didn't really believe in, and didn't really analyse and realise his good points.

"To train together - in our sport we can't train on a MotoGP [bike], we have to find something different, but every time we're going flat-track [racing] or motocross, we push each other.

"This puts us on the limit, we take risks but it's part of our sport and I think it works, because fortunately both of us came from motocross so we have this similar base.

"Yes, the consequence is the risk [that he will beat me], but I think [training together] can help both, because he's really talented and I think it's really positive."

Petrucci's "very aggressive" decisive move for the lead on the final lap at Mugello led to Dovizioso dropping behind Marquez and losing ground in the title race. 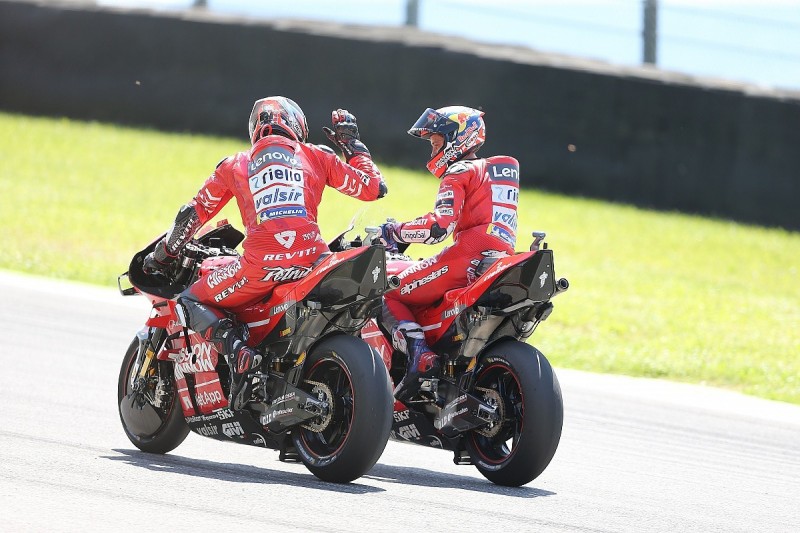 But Petrucci has since vowed to focus on supporting Dovizioso's title challenge against Honda's reigning champion.

Queried about the type of help he had be expecting from Petrucci in the title race, Dovizioso said: "Nothing strange. I think like we did until now.

"If we can speak during practice, we analyse tyres, set-up, [how it feels] if you follow some other riders.

"Everything you can understand from the practice can always help you to manage every situation in a better way."

Petronas SRT's Quartararo has surgery, will be fit for Barcelona