Andrea Dovizioso claimed his second career MotoGP victory and first for Ducati in a dramatic Malaysian Grand Prix, becoming the ninth different winner of the 2016 season

Polesitter Dovizioso was in the lead pack throughout the race at Sepang, which was delayed by 20 minutes and reduced by one lap to 19 due to heavy rain, adding to his 2009 British Grand Prix success with Honda.

Jorge Lorenzo took the lead off the line, but it only lasted until Turn 5, and he was ultimately bundled back down to fifth over the remainder of the lap.

Dovizioso led briefly on that first tour, but was passed by Valentino Rossi at Turn 15, who only led until Andrea Iannone took the lead at Turn 12 on lap two.

In a tight top three between the Ducatis, Rossi looked up the inside of Iannone at Turn 4 and Turn 9 on lap 5, but Iannone emerged ahead both times.

With a cleaner move into Turn 1 on the sixth lap, Rossi claimed the lead but he could not pull away on his Yamaha, with Iannone moving back into top spot at Turn 15.

From there, it was status quo mid-race at the front, the top trio split by about half-a-second, followed by world champion Marc Marquez and LCR Honda's Cal Crutchlow. 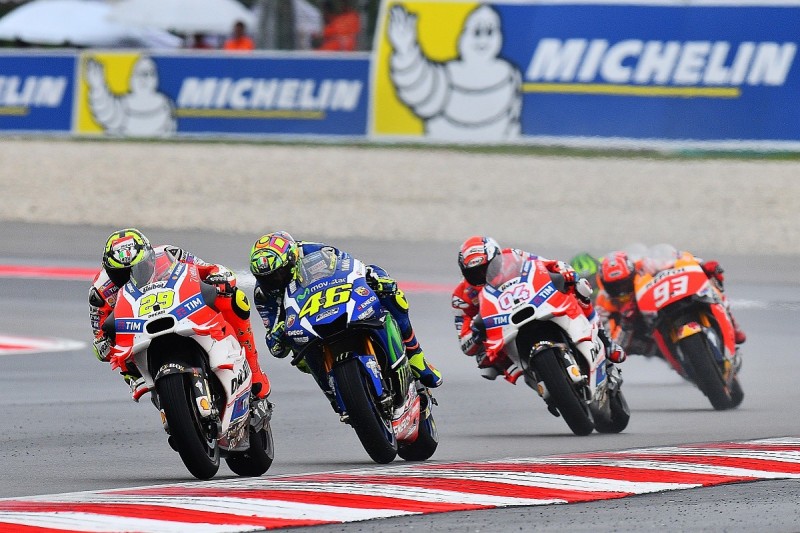 Rossi ended that with a move on Iannone at Turn 9 on lap 11, which signalled the start of a dramatic chain of events.

Over the course of two laps, LCR Honda's Crutchlow fell from fifth at Turn 2, Marquez went down at Turn 11 and Iannone was passed by Dovizioso and then crashed out of contention at Turn 9.

That left Rossi and Dovizioso alone at the front with six laps to go, split by 0.159s.

However Rossi ran wide at Turn 1 on the following lap and Dovizioso snuck past, moving into a lead he would not relinquish.

As Rossi's pace dropped with front-tyre concerns, Dovizioso pulled away to win by 3.115 seconds.

Second place was enough for Rossi to secure second in the 2016 championship over his team-mate Lorenzo, who initially hung on behind the lead pack.

However, while Lorenzo fell away, he benefited from the crashes ahead to finish third, 8.809s behind Rossi.

Avintia Ducati's Hector Barbera claimed a career-best result of fourth, getting ahead of team-mate Loris Baz in the closing laps.

Marquez was able to get back on his Honda, after his second race crash in seven days, and picked his way back up the order to finish 11th.