Due to the COVID-19 pandemic forcing the Argentine and US GPs to be postponed, MotoGP remains in Qatar for a second week for the first ever Doha GP.

Morbidelli’s Qatar GP last Sunday was wrecked by a technical issue that he admitted on Thursday hasn’t fully been diagnosed by Petronas SRT and Yamaha.

He set the early pace at a 1m58.991s in the largely irrelevant afternoon FP1 at Losail, before bettering that pace with a 1m55.847s.

Moments later he was shown the black and orange flag after his M1 bellowed smoke at Turn 1, forcing Morbidelli back into pitlane – though it was only a brief interruption to his session.

Aprilia’s Espargaro – who felt the marque proved last Sunday its pre-season was “no joke” having finished seventh and the closest an Aprilia had ever been to a victory in the MotoGP era – moved ahead of Morbidelli at the same time with a 1m55.429s.

This stood as the benchmark until just under 18 minutes to go, when Tech3’s Danilo Petrucci shot to the top of the order on the KTM with a 1m55.263s.

Morbidelli returned to top spot soon after with a 1m55.125s, which he improved on his following tour to a 1m54.7s – only for it to be cancelled for exceeding track limits. 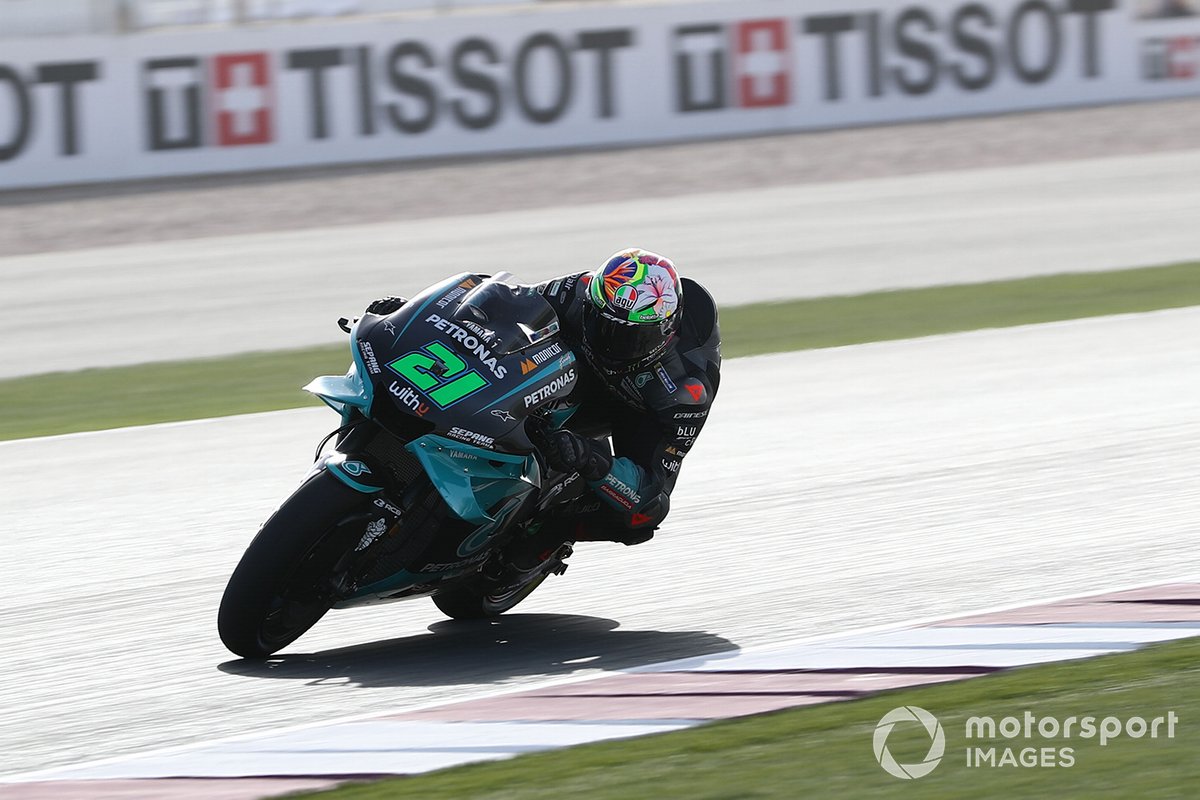 However, more smoke was spotted coming from Morbidelli’s SRT Yamaha, forcing him to pull into pitlane again – the issues seemingly striking both of his machines.

Despite FP1 not likely to have any bearing on the Q2 order ahead of Saturday’s qualifying, there was still a flurry of quick laps in the closing stages.

Qatar GP winner Maverick Vinales on the factory Yamaha traded top spot with Espargaro, with the Aprilia rider edging ahead with a 1m54.779s.

Most completed the whole session on the hard and medium rear tyres – options which won’t be raced due to the cooler conditions in the evening – but Suzuki’s Alex Rins went for a soft tyre time attack at the end.

Rins leaped up to second, 0.060 seconds behind Espargaro, with Vinales the only other rider in the 1m54s bracket in third a further 0.025s adrift.

Pramac rookie Jorge Martin was fourth ahead of Morbidelli, while the struggling Petrucci held onto sixth as he continues to adapt to the RC16.

With Luca Marini in 11th for Avintia, Pol Espargaro was 12th on the works team Honda ahead of LCR’s Alex Marquez and the Qatar GP’s top rookie Enea Bastianini (Avintia).

The factory KTM riders continued their underwhelming showing in Qatar in 15th and 16th, Miguel Oliveira heading the under-fire Brad Binder – who came in for some flak from Valentino Rossi on Thursday for his aggressive riding during the Qatar GP.

Rossi on his Petronas SRT Yamaha was a low-key 17th in FP1, with Qatar GP poleman Francesco Bagnaia 20th on his Ducati and race runner-up Johann Zarco rounding out the field in 22nd having crashed early in the session at Turn 15.

Vinales “pissed off” over Yamaha’s starts to MotoGP races