Jake Dixon admits he is “really annoyed” with how his MotoGP debut at the British Grand Prix went, feeling he was only able to ride at “50%” of his potential.

The former British Superbike star and Moto2 racer was called up by Petronas SRT to take Cal Crutchlow’s place as Franco Morbidelli’s stand-in at Silverstone, after the factory Yamaha squad needed Crutchlow to replace the ousted Maverick Vinales.

Dixon found over three seconds in lap time from FP1 to qualifying – in which he was last – and was on buoyed ahead of the race after ending warm-up just 1.6s off the pace.

But the Briton ended the British GP 50.8s from the victory in last having felt like he was “riding two different bikes” from warm-up to the race, suggesting his woes were a result of a tyre issue – one of a number of riders to suffer similar issues.

“Yeah, really annoyed with how things went in the race,” Dixon said of his debut.

“It wasn’t an ideal situation for me, like after morning warm-up I had really good pace to be able to go with the group off the back of the pack.

“But, unfortunately the bike and the grip levels definitely didn’t feel the same in the race and was definitely more unrideable.

“For me it was like I was riding two different bikes, but it’s just very, very frustrating to finish that way after such a positive weekend.

“So, for me that’s the most annoying thing.”

Dixon heaped praise on the team and says he learned a lot from his maiden MotoGP weekend, while adding that the race was “undone business”. 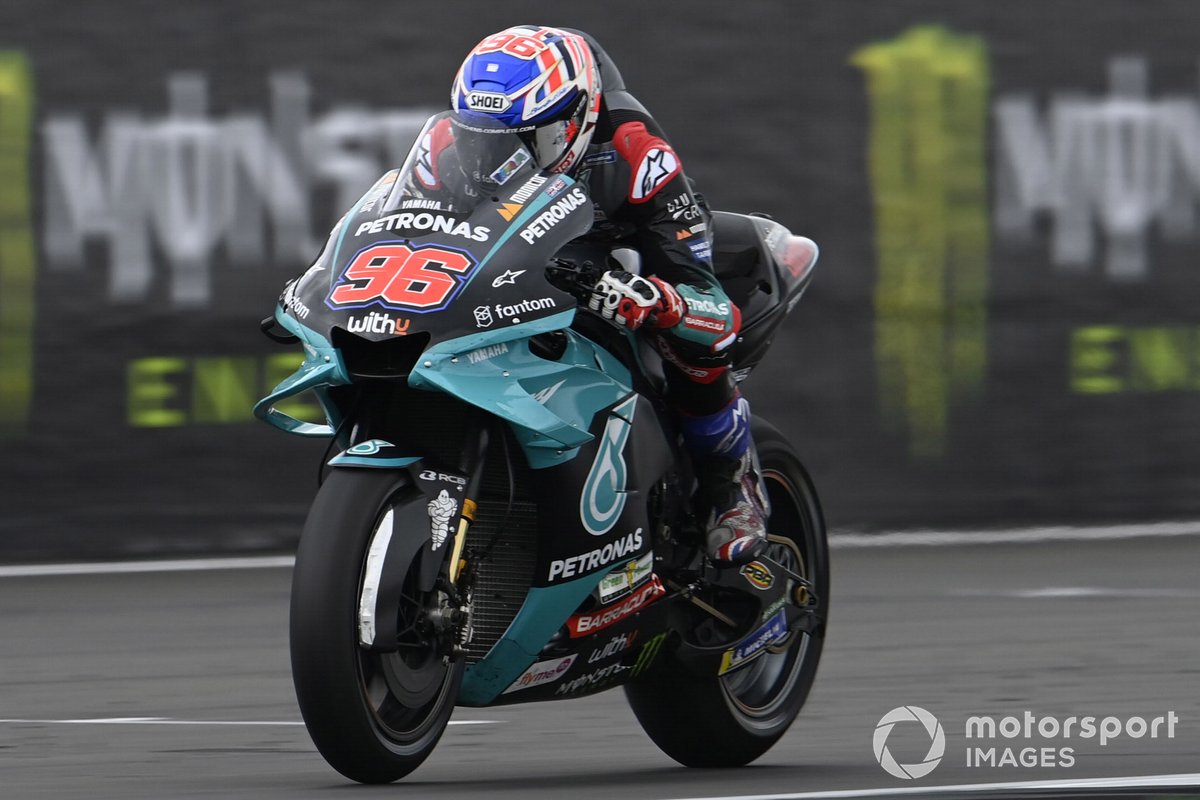 “The team has been incredible, Ramon [Forcada, crew chief], Andy [Griffith, data analyst], all the Yamaha technicians, all my mechanics.

“I’ve just learned so much, and like I say in the morning warm-up I was going really good to be 1.6s off the top but also only a tenth off Valentino [Rossi], and my pace was very similar to him if not better.

“So, I was quite positive for the race. So, I can’t just leave that undone business. I felt I rode around at 50% because I felt that was all I was capable of today.”

It is not known yet whether Dixon will remain on the bike for Aragon as Morbidelli is expected to remain sidelined, with SRT offering the ride to Dixon’s Moto2 team-mate Xavi Vierge.

“I have no idea, honestly it’s too early to even say,” Dixon said when asked if he would be racing again in Aragon.

“As you saw last time it was even late last time knowing I was doing this.

“So, me, I don’t have any ideas. At the minute I’m just more annoyed from the whole situation of the race rather than focusing on the next GP.

“I think it would be for me great, but there’s certain things on my mind that I would love to have another go on the bike and I would love it to lead to something more. But, who knows?”