Crutchlow will end his full-time racing career after this weekend's race at the Algarve Circuit and will return to Yamaha as its official test rider in 2021.

The LCR rider topped the Q1 session and narrowly missed a final front row start by 0.118 seconds in fourth spot.

Crutchlow admits he nearly crashed at the downhill right-hander of Turn 11 on his best lap and believes this is where he lost a chance at making the front row.

"I made a big mistake in my lap in Q1 actually, which obviously didn't really matter because I got through anyway," Crutchlow said in response to a question from Autosport.

"I just missed the back of [Danilo] Petrucci into Turn 13, I locked the front wheel. For some reason he was braking and I was still accelerating.

"So, either I missed my braking marker or he braked really early. So, I ran really deep and I thought I was going off the track.

"I managed to put it down, I still did a really good last sector. So, all I thought in Q2 was if I just do a good job in the first three sectors then I knew I could nail sector four.

"The problem was my sector four was still not as quick as my Q1. I did take a couple of tenths, but I braked a little bit early.

"Where I messed up was in sector three, I nearly highsided at Turn 11 down the hill and lost two tenths. 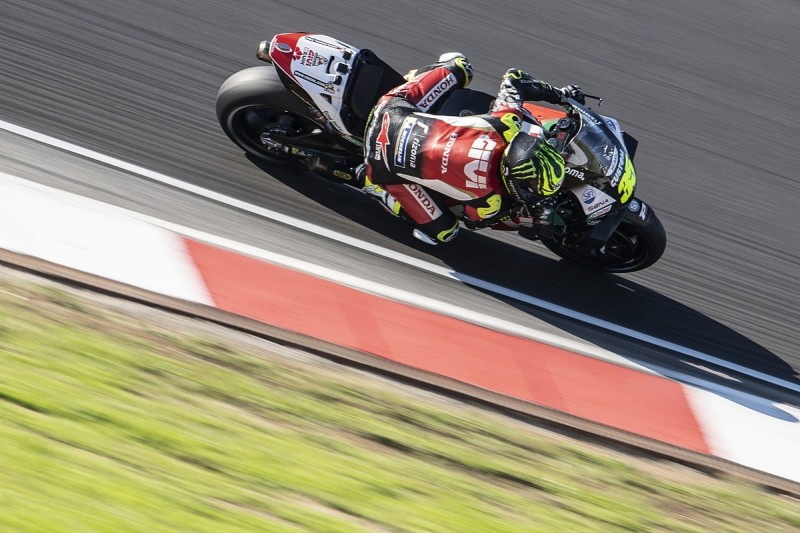 "That was my front row and my chance for pole [gone]. Anyway, I'm happy, I put it on the line today and that's all I could ask of myself in my last qualifying session."

Crutchlow exited the pitlane for his final Q2 run alongside his friend Jack Miller, though says there was no plan between the pair to aid the LCR rider's qualifying.

The Briton admits he knew Miller would be a good rider to follow, but joked the Pramac rider "fucked me" by taking the front row away from him with his last flying lap in third.

"I knew Jack will go for it, so I wanted to position myself in a decent enough place," he said.

"The problem was the idiot blew Turn 1 so much that he took me in as well.

"I blew Turn 1 a little but still kept on the race track and did not have a bad sector, so I continued my lap.

"And then he fucked me by taking the front row off me on the last lap. So that's it. So, he's back in the bad books and we're not speaking anymore.

"No, it wasn't a plan. Jack knows I'm the older statesman out of the two of us, he's got the respect to turn me around because with the old age, getting going isn't that easy.

"And he pushed like mad on the outlap to catch maybe [Franco] Morbidelli or someone.

"And I was thinking 'fuck, I can't even keep up on the outlap'. But then obviously I got a good lap to manage at that point the front row and fourth position for turn 1."