Crutchlow: I still want to go to Aprilia for 2021 MotoGP season if I can

Outgoing LCR MotoGP rider Cal Crutchlow says he still wants to "do the Aprilia option" in 2021, shooting down suggestions his current injury woes could lead him to retirement instead

Crutchlow was forced to withdraw from this weekend's San Marino Grand Prix and the following race at Misano owing to complications from recent arm pump surgery.

His MotoGP future beyond this year is still uncertain after Honda moved him out of his LCR ride to make way for Alex Marquez in 2021.

Linked to Aprilia, Crutchlow has previously expressed a keen interest in a move to the Italian marque, and once again stated a desire to go there if possible.

Aprilia is publicly sticking by Andrea Iannone while he awaits to see if his 18-month doping ban will be upheld, while Andrea Dovizioso's departure from Ducati has complicated matters - though Aprilia CEO Massimo Rivola has previously said it's unlikely his team could afford Dovizioso.

When asked if he was having any thoughts of retirement owing to his injury woes, Crutchlow responded: "No. I want to be able to ride in a good way.

"I'm still fast, I proved that [Friday] morning [when he was eighth in FP1] with one arm on a very difficult bike at this track.

"What will be will be, if there's an opportunity for me to ride next year.

"Obviously, yes, I still want to do the Aprilia option and go to Aprilia if I can.

"I think it will be a great relationship for me and the team, I think I can do a good job, I think the bike has the potential to be on the podium and it would be good to be able to do that." 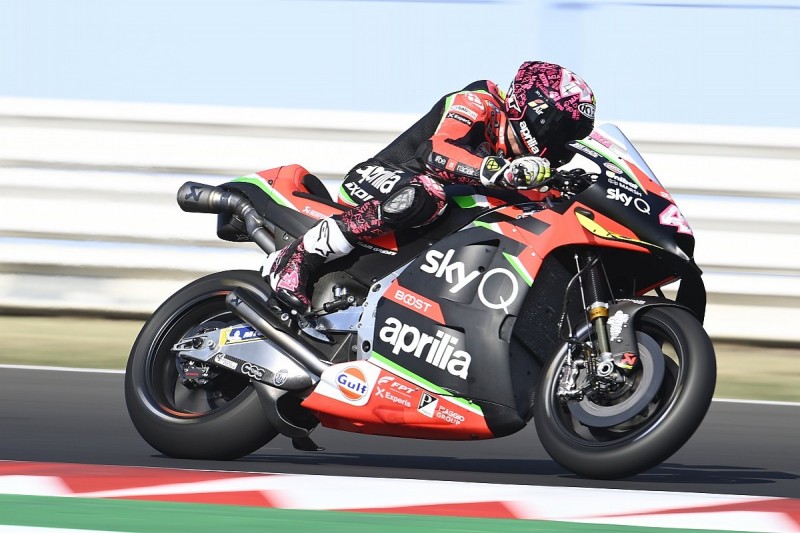 Aleix Espargaro, who will remain with Aprilia next year, says there is "no doubt" about Crutchlow's speed - but he insists he just wants "a very fast guy" as a team-mate in 2021, regardless of who it is.

"No doubt about how fast Cal is," Espargaro said when asked for his thoughts on Crutchlow's comments.

"I don't really need a fast guy to be motivated, but when you have a super-strong guy by your side it's more easy to try new things, sometimes you can go to one track where you struggle and you can compare the data.

"So, Cal has proved in the last years that he is one of the strongest riders on the grid and even if now he is not having his best moments due to the crashes and injuries, no doubt about his performance.

"The good thing is that if Aprilia is talking with Dovi and Cal, it's a good sign because they are really two good riders and this is good for Aprilia.

"2021 is an important year for us, this RS-GP is the best Aprilia bike in the MotoGP era.

Will introducing radios change the "DNA" of MotoGP?