The low-grip nature of the Misano circuit was something consistently highlighted across the weekend, with recent work carried out to clean rubber off the surface to improve wet weather grip ultimately having a negative effect on the condition of the asphalt in the dry.

Crutchlow - who struggled all weekend to extract pace from his Honda - fell at the Quercia left-hander while running a lowly 12th, and was at a loss to explain the tumble having "done nothing different" to previous laps.

"I did nothing different to any other lap and I just crashed," he said of his Turn 8 spill

"It was exactly the same crash Marc [Marquez] had in FP4.

"I was going as fast as I could without crashing and I ended up crashing.

"Just at the last moment in T8, but I did not feel that I was gonna crash at all.

"I was trying to ride to the finish in the fastest possible speed, which was very slow.

"I had no warning from the crash.

"I had more warnings on the right-hand side and I ended up crashing on the left-hand side. This is a problem." 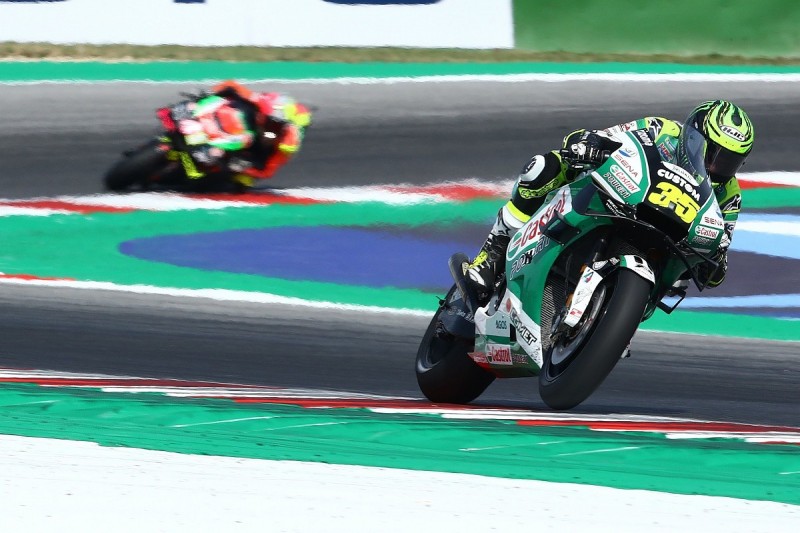 Bagnaia - who fell at Turn 4 - reported he experienced "very dangerous" issues he never had prior to the race nor in the pre-race Misano test.

"When I started the race I was feeling something strange with the front tyre because I was losing the front in a lot of corners, most of all in the fast corner like T3 and T11, and it was very dangerous," he added.

"I never lost the front all weekend and at the test, and in the race I lost a lot of time.

"Also, the crash is difficult to understand from the data because it [revealed] nothing strange: the same braking, same speed, same line [as prior laps]."

Rins, who also crashed at Turn 4, pinned his fall on simply releasing the brakes too early, which meant he was not carrying the correct corner speed.

Bagnaia's Pramac team-mate Jack Miller made it to the finish in ninth, but also suffered numerous front end moments and admits he was "paranoid" about crashing.

"The front on the right-hand side, I had a few quite scary moments late in the corner," said Miller.

"And on the left side. The way the weekend was going, we'll take it [ninth].

"The rear, I had no dramas the whole way through, but the front was moving around a bit too much, especially in the last quarter of the race.

"Turn 14 was a nightmare, Turn 10, all those slow ones. [I was] Just paranoid: Every time you go in there, you're hoping you come out the other side."