Marquez, who needs to outscore Andrea Dovizioso by two points to seal the title this weekend, was thrown off his Honda at the Turn 7 right-hander on an out-lap late in the session.

The impact with the ground ripped the rear wheel off Marquez's RC213V and left the rider himself needing the better part of a minute to get up off his knees.

He limped off the site of the crash with the aid of track workers, and climbed into the track ambulance that took him to the medical centre.

Marquez had immediately taken over out front at the very start of the session, and was over a second in the clear after the opening salvo of laps.

And while the gap was reduced shortly afterwards, nearest rival Valentino Rossi was still over eight tenths off Marquez's 1m31.187s effort.

As the 45-minute session passed its halfway point, Vinales closed to within half a second of Marquez. Dovizioso then followed Vinales on a flying lap to further reduce the gap to the championship leader.

But he was then eclipsed by factory counterpart Vinales at the chequered flag, the Spaniard ending the session two tenths clear courtesy of a 1m30.979s. 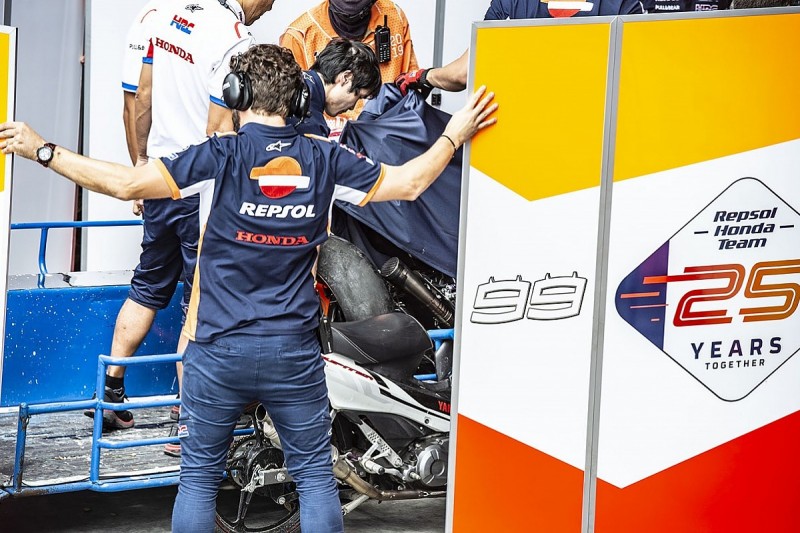 Despite the crash, Marquez ended the morning in third - narrowly ahead of the two Ducatis of Dovizioso and Jack Miller.

Rossi ended up sixth, one place ahead of Quartararo's Petronas team-mate Franco Morbidelli, who made it four Yamahas in the top seven.

Suzuki's other rider Alex Rins had his bike cut out on the main straight in the closing stages of the session, and was towed back to the paddock. He ended up 11th, ahead of the Espargaro brothers Aleix and Pol.

The latter was the comfortably the fastest KTM rider, despite continuing to nurse the left wrist injury he'd sustained at Aragon.

Tech3 KTM rookie Miguel Oliveira had crashed at the same corner as Marquez at the very start of the session, but rejoined soon and ended up 17th.

Takaaki Nakagami in 14th was the next-best Honda behind Marquez, while the two 2019-spec RC213Vs of Nakagami's LCR team-mate Cal Crutchlow and works rider Jorge Lorenzo could only muster 18th and 19th respectively.