Cal Crutchlow claimed his maiden MotoGP victory in the Czech Grand Prix with an inspired performance and tyre call, scoring the first British victory in the premier class since 1981

Crutchlow started 10th on his LCR Honda, but led home Valentino Rossi by seven seconds to win in his 98th MotoGP start.

The last British victory was recorded by Barry Sheene in the 1981 Swedish Grand Prix at Anderstorp, while it is also LCR's first win in MotoGP.

Rain on Sunday at Brno stopped an hour before the race, and while the track surface was still wet, teams faced a tough choice on tyres.

Most opted for the soft front and rear wet tyres, but Crutchlow started the race with hards on the front and rear, and Yamaha pair Rossi and Jorge Lorenzo went for the hard rear only.

Early on there was pain to be felt for those on hards, as Andrea Iannone led Scott Redding, Andrea Dovizioso and Hector Barbera in an all-Ducati top four that lasted until an apparent tyre issue ended Dovizioso's challenge on lap 10 of the 22.

Lorenzo and Rossi dropped from second and sixth on the grid down to 10th and 12th by the end of the first lap, while Crutchlow was buried even further back.

While Lorenzo fell down the order, Rossi and especially Crutchlow soon found their groove to make ground back up.

Crutchlow was the first rider into the 2m08s barrier as he cut through the field from 14th, lapping nearly two seconds faster than the leaders.

By the time he passed Aleix Espargaro for sixth, he was just four seconds off the lead.

Crutchlow's progress continued unabated, the Briton catching the lead pack before passing Marc Marquez, then Barbera and Redding to settle in behind Iannone. 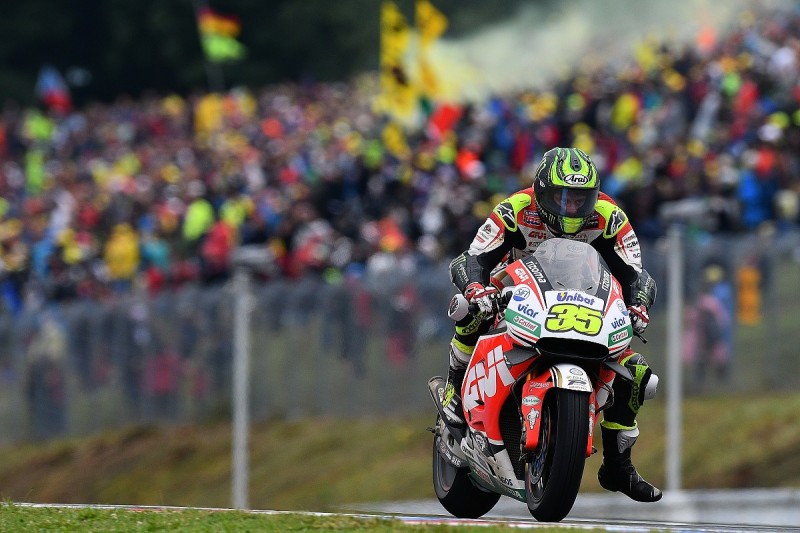 While it took Crutchlow several laps to get past the factory Ducati, when he was able to get ahead he bolted, putting 1.5s on the group in the first lap.

By the end of the next lap - with four to go - Rossi was up to second, but Crutchlow was 4.8s clear.

Crutchlow managed that gap through to the flag and won by 7.298s.

"I took a gamble," he said of his tyre choice.

"We did the best job we could today, I'm pleased for my team.

"I smashed a bike yesterday and they didn't leave the track until midnight, so this is the best way to repay them."

Rossi finished second, ahead of Marquez, who was the best of the riders on the soft tyres in third.

Lorenzo did not enjoy the same rise through the order as Rossi and pitted twice to change bikes in disastrous scenes, shaking his head each time. He ultimately finished 17th.

Marquez now leads the championship with 197 points, 53 points ahead of Rossi with Lorenzo dropping to third place, 59 in arrears.

For the riders who led early, the final laps were a matter of survival, with chunks firing off their soft tyres in some instances.

Loris Baz was on the same compounds as Crutchlow and cut his way through to fourth, ahead of Avintia Ducati team-mate Barbera, Eugene Laverty and Danilo Petrucci.

Iannone faded to eighth in the final laps, narrowly defending that position from Suzuki's Maverick Vinales at the line, while Tito Rabat nabbed 10th.

Redding eventually crossed the line in 15th place. Dovizioso rejoined the race on intermediates but ultimately retired along with Bradley Smith - who had pitted to change to slicks - and Aleix Espargaro, whose Suzuki stopped on track.

Cal Crutchlow: I was playing with MotoGP rivals in Brno win