Sunday’s Austrian GP was run under largely dry conditions, but the rain intensified with seven of the 28 laps remaining.

This slowed up the lead group headed by Marc Marquez, Francesco Bagnaia, Fabio Quartararo and Jorge Martin, with Joan Mir and Binder able to close right in.

On lap 25, all of that group except Binder pitted to change to their wet bikes, with the KTM rider staying out on slicks and ultimately taking a sensational victory by over 12 seconds (though he was hit with a three-second time penalty for exceeding track limits).

Binder admits he thought his race was finished on several occasions on the final lap as he couldn’t stop his bike and says staying on his KTM was “virtually impossible”. 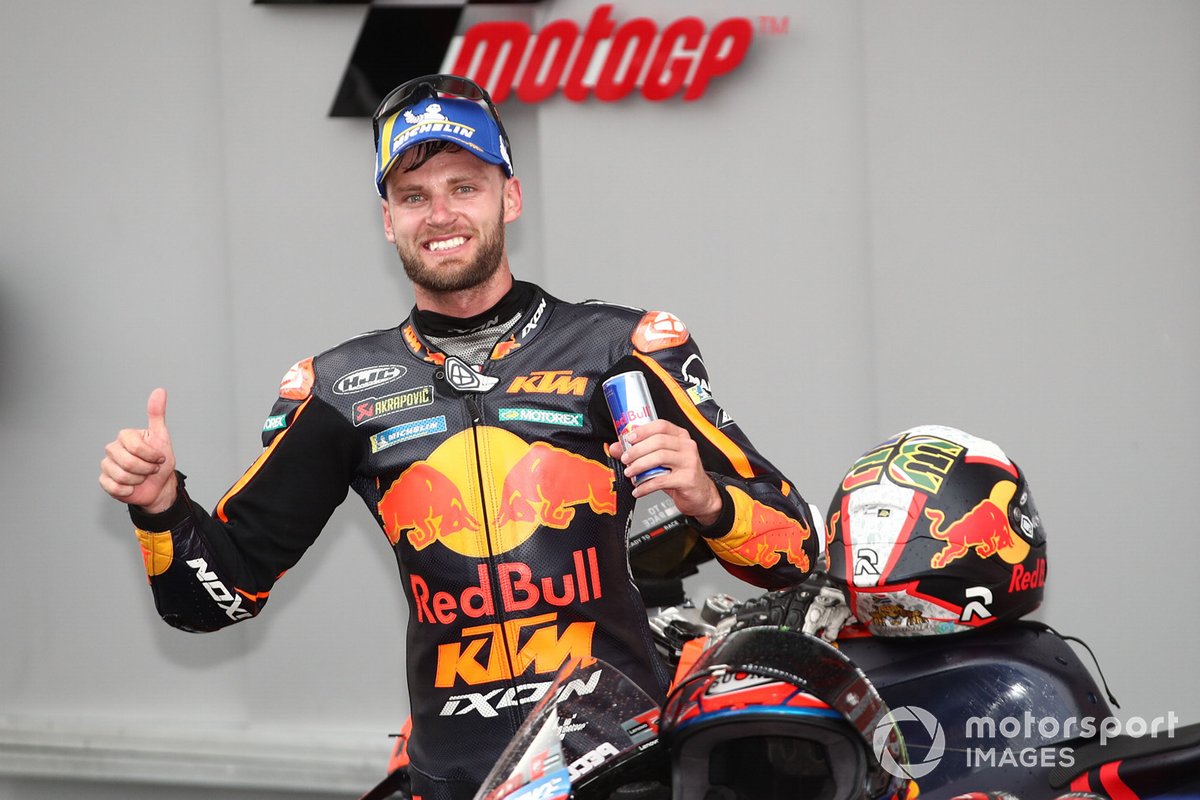 “For me, there’s not much to say, it was a disaster,” Binder said.

“I came across and I saw plus nine on my board, so I knew it was 10 seconds [to the rider behind] more or less, but is someone on wets or slicks because if it was someone on wets they would have caught me, someone on slicks maybe not.

“I just tried my absolute best, I just tried to make sure I stopped, got around the corner and just went flatout up the straight.

“I mean, just to stay on track on the last lap was virtually impossible.

“Actually, I thought it was finished a couple of times because at Turn 3 I wasn’t stopping and the only thing that was working a little bit was my rear brake.

“So, I was using the rear brake and the thing was sideways, I was touching the steering lock and it went straight a little bit.

“But I managed to stop and stay on track.

“And, after that, in those long right-handers you just don’t go forward, it was just staying in the same spot.

“I was waiting for someone to come flying past me, but the feeling when I saw the flag was a feeling of relief that it was over and on the other hand I couldn’t believe we had won today.”

Binder admits, before the rain, his race in the dry was “horrendous” owing to a lack of grip from his medium rear tyre, while noting his gamble to stay out on slicks in the rain was a last-minute decision.

“When I saw it started to rain, I closed up onto the front group and it was four laps to go and I could see the guys were getting ready to come in because I saw Marc look behind him,” he added.

“I couldn’t decide if I go or not, and I decided at the last minute when I saw the whole group pull into the pits that I had to try.

“The first lap was good and then the last two were something else.

“I got around more or less OK two laps to go, the last lap the brakes went completely cold and so did the tyre.

“So, I couldn’t stop. So, whenever I needed to stop, I literally felt like rolling because no matter how hard I pulled the [brake] lever nothing was happening.

“I really struggled to stay on track. But sometimes you’ve got to take the gamble and today it worked.”