Binder "surprised" to be top MotoGP rookie despite several crashes

Brad Binder says he was "surprised" to be crowned MotoGP's rookie of the year "with the amount I've fallen off this season", after beating Alex Marquez by 13 points

The KTM rider was one of three rookies on the MotoGP grid in 2020, along with Tech3 KTM's Iker Lecuona and Honda's graduating Moto2 champion Marquez.

Binder looked nailed on to take top rookie honours after storming to his maiden MotoGP victory at the Czech Grand Prix, but a dip in form in the second half of the year coincided with Marquez getting the Honda to work to his liking and scoring consecutive runner-up finishes at Le Mans and Aragon.

But despite crashing out of the Portuguese GP finale - which was his fourth DNF of the year - Binder ended the season 11th in the standings and best of the rookie bunch after Marquez could only manage ninth in the race.

"To be honest, I'm really surprised I got it with the amount I've fallen off this season," Binder said of winning the rookie of the year prize.

"Anyway, I really, really wanted to finish the season on a high note and get a podium at least.

"But it wasn't meant to be, so we'll have to give it a try next season."

Binder will be joined at the KTM factory squad next year by former Moto2 team-mate Miguel Oliveira, who dominated the Portuguese GP. 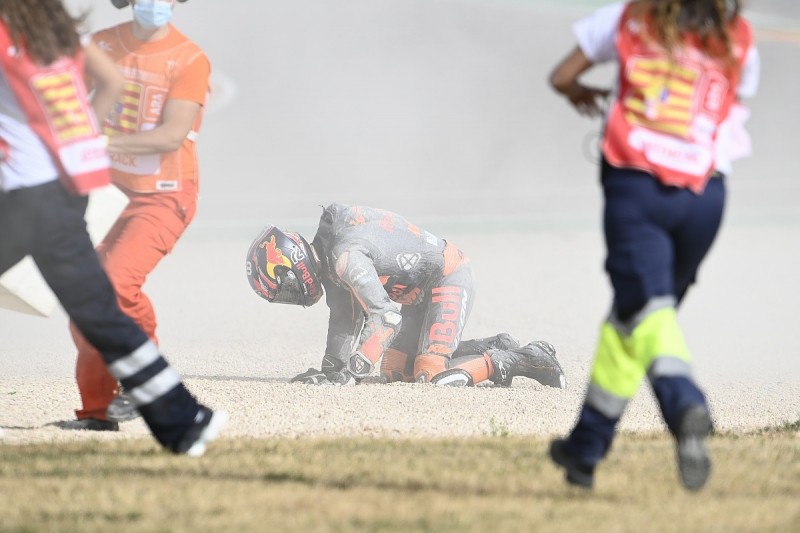 The South African says he was "super-chuffed" to see Oliveira win on home soil and is excited to share a garage with him again.

"He's been a colleague and a rival for many years already," Binder added.

"I'm super-chuffed to see him win in front of his home fans, home grand prix.

"Miguel's a super-cool guy and it's awesome to see him do well here. I'm looking forward to sharing the box with him next year."

In the absence of elder brother Marc through injury, Marquez ended Honda's first winless season in the premier class since it returned full-time in 1982 as its only podium finisher, with test rider Stefan Bradl failing to shine.

Marquez felt his crashes out of strong positions in the Teruel and European GPs made Binder a deserving winner of rookie of the year.

"Binder has deserved the rookie of the year in two errors [I made], in the second race at Aragon and in the first in Valencia," Marquez said.

"The balance of this year is positive, I learned a lot. I would have liked to have started better, but that has always been my DNA - to go from less to more.

"We have achieved the objective that the people in the garage had fun, and I think that is positive.

"In addition, I was the only Honda rider who has been on the podium, so that makes the season positive."

Binder's famous maiden win for himself and KTM at Brno features in the vote for Moment of the Year in the 2020 Autosport Awards. Voting is open here.