Pramac’s Johann Zarco pipped Franco Morbidelli to top spot in second practice for the MotoGP Catalan Grand Prix, the pair split by 0.021 seconds in the end.

With the Barcelona circuit having rubbered in some more since this morning’s FP1 session, the opening stages of FP2 were fairly frenetic as several riders took to the top of the times.

Tech3 rider Iker Lecuona – whose MotoGP future beyond 2021 looks in doubt – set the initial pace on his KTM with a 1m40.860s, which world champion Joan Mir on the Suzuki immediately bettered to a 1m40.342s.

Having ended FP1 third fastest, Pol Espargaro picked up where he left off at the start of FP2 and edged ahead of Mir with a 1m40.146s on the factory Honda.

Team-mate Marc Marquez took a brief trip to the top of the standings with a 1m40.120s, before world championship leader Fabio Quartararo took over with a 1m40.006s 10 minutes into the session.

Moments later his Yamaha counterpart Morbidelli – working with the hard rear tyre – went sub 1m40s for the first time on Friday with a 1m39.909s on his Petronas SRT-run ‘A-spec’ M1.

Morbidelli’s time went unchallenged until the closing stages as a period of race preparation halted any major timesheet changes. 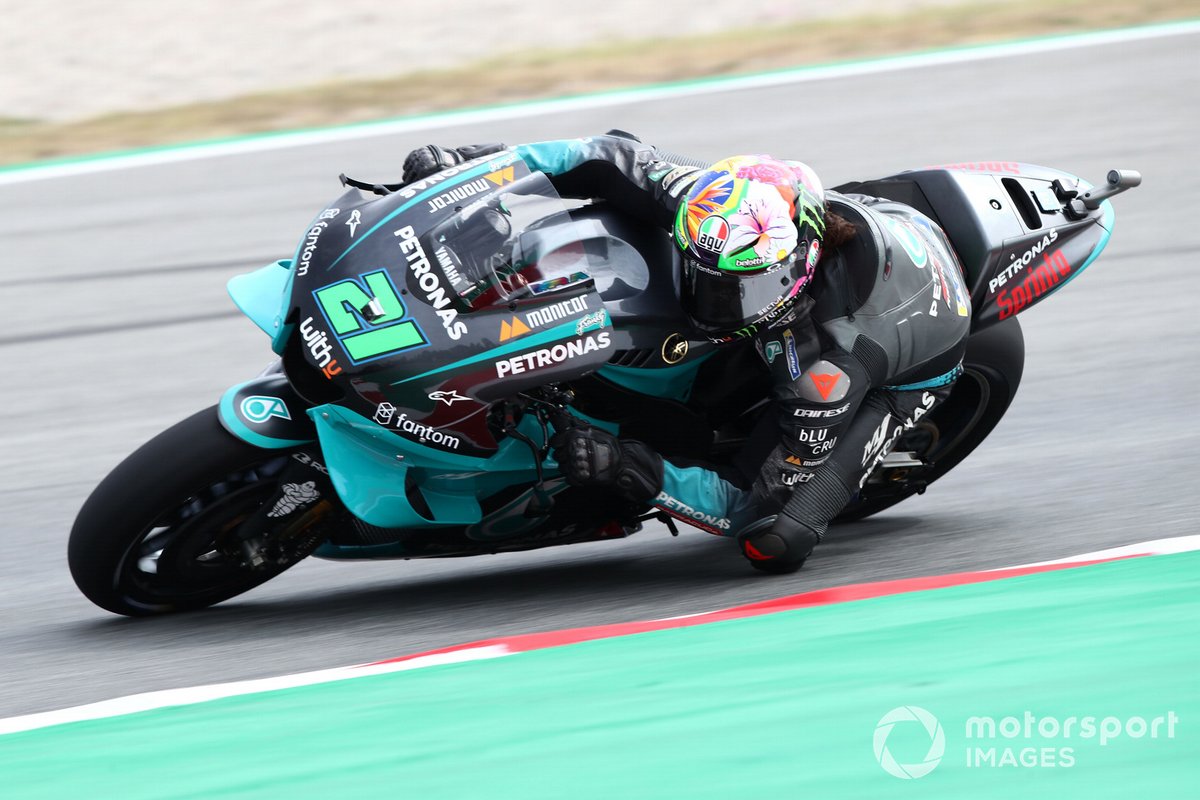 The SRT rider’s lap was finally toppled with just over a minute remaining when Brad Binder – who has secured his KTM future through to the end of 2024 – moved clear with a 1m39.662s.

Binder was soon pipped by Zarco with a 1m39.446s, before Morbidelli re-established himself at the head of the pack with a 1m39.256s.

Trailing Zarco and Morbidelli was Quartararo on the works team Yamaha, with Binder fourth at the chequered flag ahead of factory team Ducati rider Francesco Bagnaia.

Maverick Vinales completed the top six on his factory Yamaha ahead of the sister works team Ducati of Jack Miller and an impressive Avintia rookie Enea Bastianini on a two-year-old Desmosedici.

FP1 pacesetter Aleix Espargaro was ninth on the Aprilia ahead of the leading Honda of Pol Espargaro in 10th.

Marc Marquez slid down to 15th in the order behind KTM’s Miguel Oliveira, who ran as high as third in the closing stages.

Mir flew under the radar on the sole Suzuki this weekend in 16th, while Valentino Rossi’s struggles continued on his SRT Yamaha as he ended up 1.6s off the pace in 19th ahead of only Aprilia rookie Lorenzo Savadori and the returning Jorge Martin on the Pramac Ducati.

While several riders ran off track at the revamped Turn 10 left-hander, Luca Marini on the Avintia Ducati was the only faller in the session at Turn 4.