Franco Morbidelli pipped Fabio Quartararo to top spot in a tight FP3 for the MotoGP Catalan Grand Prix as Ducati’s Jack Miller will have to go through Q1 in qualifying.

Perfect conditions for the start of FP3 meant several riders improved on their Friday lap times in the early stages of the session.

Significantly inside the top 10, KTM’s Miguel Oliveira and his team-mate Brad Binder were big movers.

Oliveira shot up from 14th to fifth in the opening moments with a 1m39.677s, improving to fourth overall and fastest in the session with a 1m39.448s, while Binder settled into fifth spot.

After the first 10 minutes, Yamaha’s Maverick Vinales had also found time compared to his Friday best, though remained seventh.

It wouldn’t be for another 10 minutes until another big move inside the top 10 occurred, when Suzuki’s Joan Mir improved from 16th to sixth with a 1m39.705s on a fresh set of medium tyres.

A further 10 minutes after that, championship leader Quartararo fitted fresh softs to his factory Yamaha for an assault on the top of the timesheet.

On his first lap, Quartararo took over from Pramac Ducati’s Johann Zarco on the combined times with a 1m39.168s before setting the first sub-1m39s lap of the weekend with a 1m38.975s.

This looked set to keep him on top as the chequered flag brought the session to a close, but former team-mate Morbidelli on the two-year-old SRT M1 put Quartararo’s lap under pressure on his final lap.

Morbidelli produced a 1m38.929s to end the morning 0.046 seconds clear of Quartararo to secure direct passage to Q2 in qualifying this afternoon. 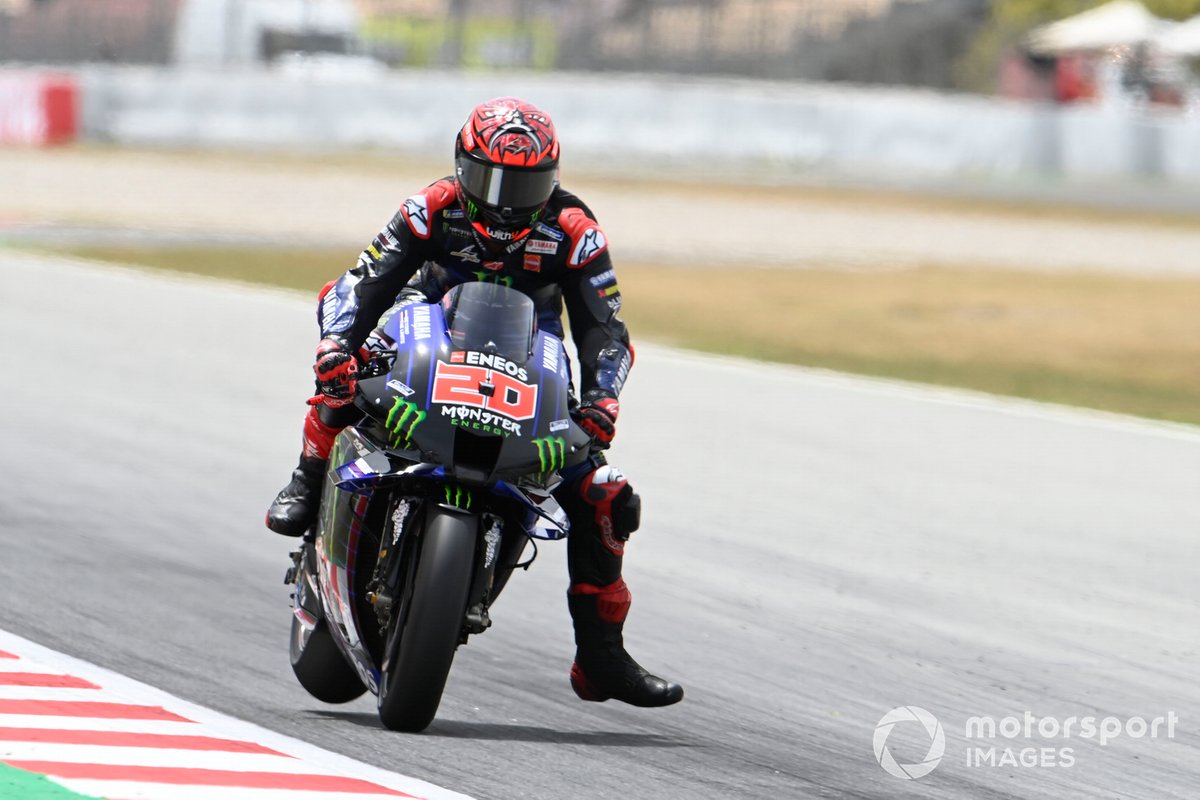 KTM’s resurgence at the Italian GP has continued into Barcelona as Oliveira completed the top three, while Francesco Bagnaia is currently the only factory team Ducati rider in Q2 after a last-gasp 1m39.073s lifted him from 14th to fourth.

Aleix Espargaro completed the top five on combined times on the Aprilia, ahead of Binder, while Zarco will go directly through to Q2 in seventh on the combined order despite not improving on his Friday lap in FP3 – which left him 15th in the session.

Completing the top 10 on the combined order was Vinales, Mir and the second SRT Yamaha of Valentino Rossi, while Miller was denied a place in Q2 by just 0.069 seconds.

Honda’s struggles at the low-grip Catalunya track continued into Saturday, with none of its riders able to get into Q2 directly from FP3.

Takaaki Nakagami was the best HRC runner on his LCR-run RC213V in 12th on the combined times ahead of factory rider Pol Espargaro, while Marc Marquez was 15th and the second LCR rider Alex Marquez 18th.

Avintia rookie Enea Bastianini was unable to better his FP2 time in 19th on combined times after crashing early on at the Turn 5 left-hander.

Aprilia’s Lorenzo Savadori propped up the 21-rider field after taking a tumble at the Turn 4 right in the closing stages.

The MotoGP enigma who needs to step up at Catalunya