New MotoGP world champion Francesco Bagnaia says he only “lost faith” in the 2022 title for “a half-hour, one hour” when he was 91 points down after June’s German GP.

The Italian made history on Sunday at the season finale Valencia Grand Prix, as he became the first Ducati rider in 15 years to win the MotoGP title for the brand after finishing ninth in the race - while rival Fabio Quartararo was only fourth.

Bagnaia is also the first rider in history to have overturned a deficit as massive as 91 points having suffered five DNFs to win the title.

That deficit stood after he suffered the fourth of his five DNFs with a crash at the German GP, but he revealed on Sunday after his title win in Valencia that he only doubted he could be champion briefly at the Sachsenring.

“I just lost the faith in the championship for a half hour, one hour after the Sachsenring race.,” he said.

“But from that moment, I was knowing that there was still a chance to be world champion.

“And the work we did this year is incredible, we performed incredibly in the second part of the year.

“We tried to analyse everything at home on what to improve, why I was crashing, why I was making so many mistakes, and from that moment we just did something incredible.”

Bagnaia says his Germany crash made him realise the inconsistency problems he had, and this was “tough to accept” at the time.

“The most difficult [moment of 2022] was Sachsenring, because I was very competitive,” he said. 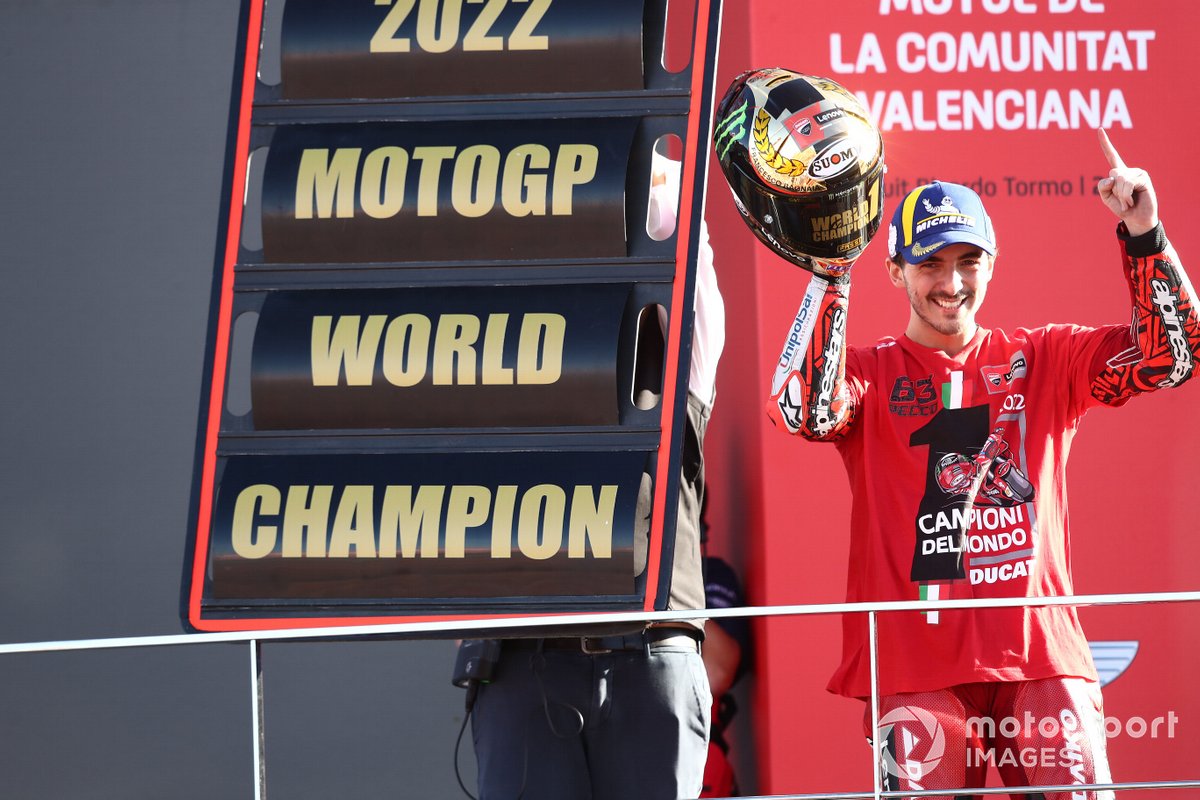 “Like at Le Mans, I was there, with a possibility to win the race and I crashed.

“And in that moment I realised my weak point was I was a rider with a lot of ups and downs, with good speed but not the consistency.

“And to accept that was not easy. So, from that moment I recognised I had a problem and I tried to improve myself.”

Bagnaia says his Valencia race was “the worst” of the season for him, with early contact with Quartararo leaving his Ducati with wing damage and turning his afternoon into “a nightmare”.

“I’m very, very happy because also on the day of the worst race of the year I had a special taste when I passed the finish line, I just saw the pit board saying I was the world champion and from that moment everything was lighter, was nice,” he added.

“My emotion is incredible in this moment. It wasn’t easy, because after that fight with Fabio I lost a winglet and from that moment everything was a nightmare.

“I dropped lap by lap, trying to be on a defensive line but was very, very hard, very difficult.

“It took so long to finish the race, but I’m very proud of my team, of myself for what we did because it was incredible.”